SEJONG, Oct. 21 (Yonhap) -- The number of layer chickens raised in South Korea dropped 4.2 percent in the third quarter from a year earlier due to the impact of the bird flu outbreak, data showed Thursday.

The number of layer chickens came to 70.7 million as of end-September, compared with 73.8 million a year earlier, according to the data from Statistics Korea.

Yet it was up from 65.9 million three months earlier and 62.1 million as of end-March, which was the lowest in more than three years.

The on-year decrease for the third quarter came as the number of such chickens has yet to recover from the impact of the avian influenza outbreak.

Quarantine authorities have culled about 30 million poultry since the outbreak of avian influenza was first reported in November last year.

A gradual rebound in the number of layer chickens is widely expected to help stabilize high egg prices down the road.

Meanwhile, the number of beef cattle raised in South Korea increased 4.3 percent on-year to 3.58 million in the third quarter, with that of pigs edging up 0.9 percent to 11.5 million. 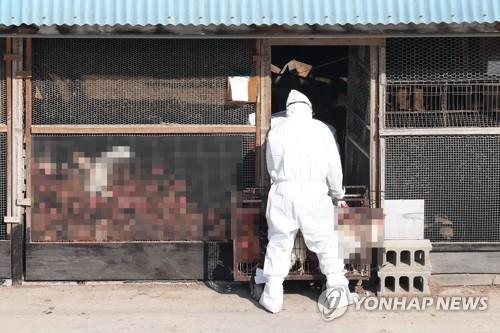 Number of chickens dips 4.2 pct in Q3 due to bird flu

Number of chickens dips 4.2 pct in Q3 due to bird flu