(ATTN: UPDATES with minister's comment about OPCON transition in paras 14-15)
By Song Sang-ho

Suh Wook made the remarks during a parliamentary audit session, as his ministry vowed to deploy more missile detection assets and reinforce cooperation with the United States to deal with the North's continued missile research activities.

Tensions flared up anew Tuesday, when Pyongyang launched a new type of SLBM from what it claims to be a submarine in a fresh setback to Seoul's dogged drive to resume nuclear diplomacy with the recalcitrant regime.

"North Korea appears to be making a lot of efforts (to develop SLBMs) as seen in its display of three SLBMs at a defense exhibition," Suh said, referring to the exhibition held in Pyongyang last week.

"But (the missile) should be paired with the launch platform. Thus, we think it is at an early stage," he added. 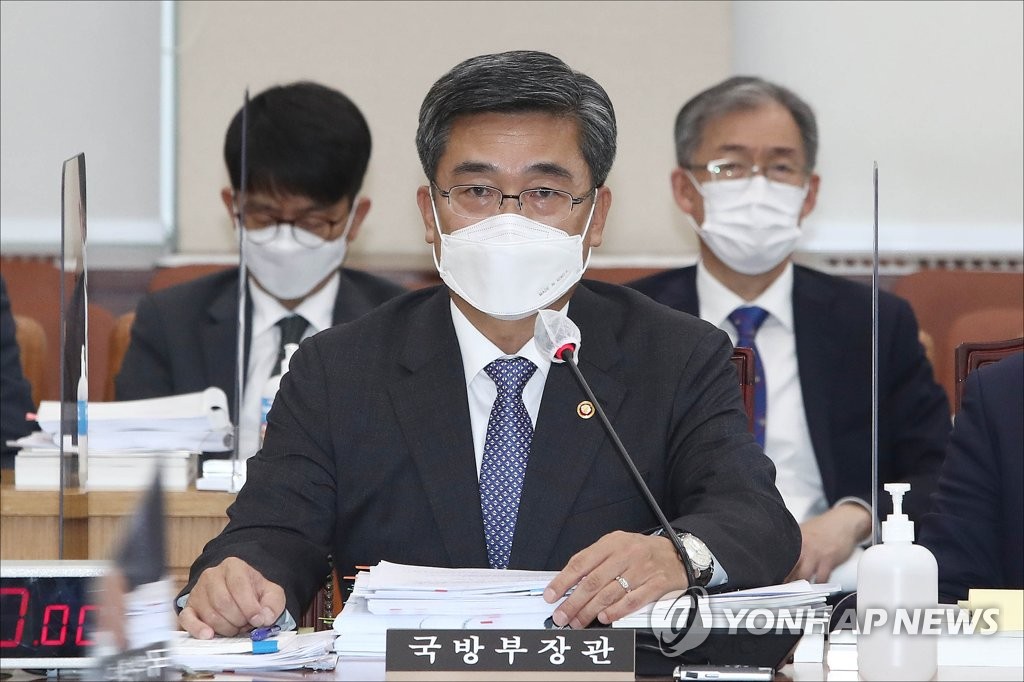 His remarks suggested there still appears to be room for improvement in the North's SLBM program, such as securing a reliable SLBM launch platform like a submarine capable of carrying and firing such seaborne weapons.

"We are not analyzing just that single SLBM launch," the minister said. "We need to look at the issue of the launch platform and whether the submarine operates normally after a missile launch."

Asked whether the SLBM can be intercepted, Suh said, "We judge that's possible."

During the audit session, the minister characterized the latest SLBM launch as an "apparent North Korean threat" as conservatives have denounced the launch as a military provocation.

Suh's cautious depiction came as Pyongyang has called on Seoul and Washington to drop what it terms "double standards" in reference to the allies' characterization of its missile launch as a provocation and of their own as a "deterrent."

"Provocations are something that inflict damage on our territorial land, air and sea, and our citizens," he said.

The evolving North Korean threats are expected to be on the agenda for the South Korea-U.S. Security Consultative Meeting (SCM), the allies' annual defense ministerial talks. The defense ministry said the SCM is set to take place in Seoul on Dec. 2.

In its policy report to the National Assembly, the ministry voiced expectations there would be "meaningful outcomes" from the SCM.

In response to some lawmakers' emphasis on the need to fix a clear timeline for the transfer of wartime operational control (OPCON), Suh said he would have "strong" consultations on the issue during this year's SCM.

Seoul and Washington were supposed to conduct joint exercises to test the former's capabilities to retake the OPCON and make progress in the "conditions-based" transfer process. But due partly to the COVID-19 pandemic, the evaluation procedures have slowed.

The ministry also said it would invest 100 trillion won (US$85 billion) from 2022-26 for the early procurement of key military assets to bolster South Korea's defense capabilities and ensure the country can retake the OPCON from the U.S. at an early date.