SEOUL, Oct. 21 (Yonhap) -- The Supreme Court on Thursday reversed a previous decision that a plaintiff who was compensated by the state under the special act on democratic movement cannot claim damages over the same case again.

The top court ordered the government to pay 115 million won (US$97,851) to Oh Jong-sang, an 81-year-old victim of draconian security laws under former President Park Chung-hee.

Oh was arrested in 1974 for criticizing government policies on a bus and sentenced to three years in prison for the violation of the Presidential Emergency Decree No. 1 and the National Security Law.

It was found out later that he was tortured and made a false confession. A state truth panel said in 2007 that his case was a grave infringement on human rights. 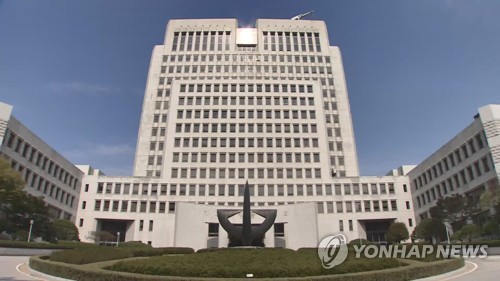 In 2010, the Supreme Court ruled Park's decree unconstitutional and acquitted Oh of all charges against him. He filed a compensation suit against the state the following year.

In 2012, a lower court dismissed his request on the grounds that he had been already paid by the state under a special act aimed at compensating those involved in democratic movements under authoritarian administrations.

The court ruled the payment constituted a legal settlement between him and the state, so he could not seek damages over the same case.

An appeals court later overturned the ruling. It decided the compensation did not deprive him of the right to pursue civil damages, ordering the government to pay 115 million won.

But the Supreme Court in 2016 rejected the appellate court's decision and dismissed his suit.

His case took a new turn in 2018, when the Constitutional Court accepted his complaint and ruled that the plaintiff can still claim civil damages over emotional distress inflicted by the state.

He immediately filed for a retrial and finally won his decadelong legal battle with the highest court's verdict Thursday.

Park, a general-turned-president, ruled the country from 1961 to 1979 before he was assassinated by his spy chief. He is the father of former President Park Geun-hye, who was ousted in 2017 for corruption and abuse of power.

In 1972, Park proclaimed the Yushin Constitution to prolong his power and issued a series of emergency decrees based on the constitution beginning in 1974.

The first decree, under which Oh was prosecuted, outlawed all public remarks and statements opposing the constitution.
(END)

Keywords
#Emergency Decree No. 1 #Supreme Court
Issue Keywords
Most Liked
Most Saved
Most Viewed All Categories
Most Viewed More
Most Viewed Photos