Foreign Minister Chung Eui-yong said the government takes the North's latest SLBM test seriously but stopped short of calling it a "provocation" that could pose a serious threat to security on the Korean Peninsula.

"South Korea's successfully launched SLBM is much more advanced than North Korea's SLBM in terms of capability," Chung said during a parliamentary audit session. "I believe our military can defend against the North's SLBM.

Last month, South Korea became the seventh country to successfully test an SLBM, and it is set to launch its first homegrown space rocket later in the day.

Chung's remarks were seen as a rebuff to the North's derision of a recently unveiled South Korean SLBM as a "rudimentary, toddling-stage" weapon.

While the U.S. and European nations condemned the North's latest missile test as a violation of U.N. Security Council sanctions that ban its nuclear and ballistic missile tests, Chung voiced a rather cautious view.

"The clear standard for a strategic provocation is whether it can have a serious effect on the broad security situation on the Korean Peninsula," he said, adding the government has already expressed regret over the recent missile launches. 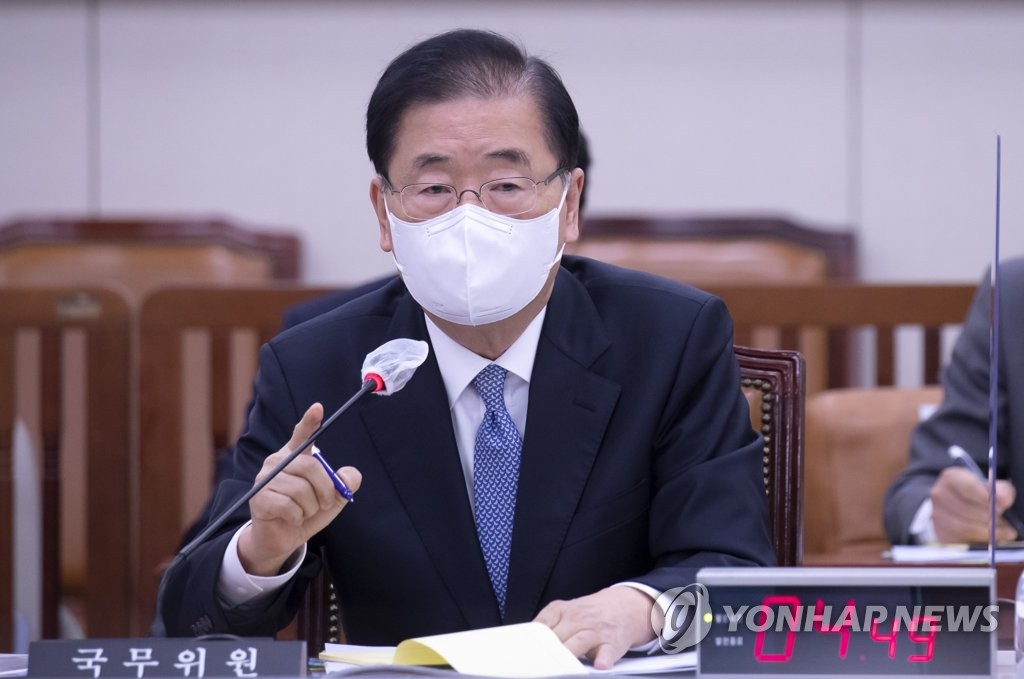 In response to calls to improve ties with Japan for tight security coordination with the administration of U.S. President Joe Biden, the minister said the Seoul government has been reaching out to the Japanese counterpart with various proposals to resolve their row over shared history, especially Japan's brutal colonization of Korea from 1910-45.

"We are pursuing various realistic, reasonable ways to advance bilateral relations in a more future-oriented manner and have been consulting with the Japanese side," Chung said, noting there has been "some progress" in recent discussions.

Relations between the neighboring countries have been stuck in the forced labor row for years since Japan imposed export curbs against the South in 2019 in retaliation against South Korean Supreme Court rulings that Japanese firms should pay compensation to forced labor victims.

Japan has claimed all reparation issues stemming from its colonial rule were settled under a 1965 treaty that normalized their diplomatic relations and urged the South to come up with acceptable solutions.