JEONJU, South Korea, Oct. 22 (Yonhap) -- A 25-year-old man has been booked for investigation after repeatedly ringing the doorbell at the home of an ex-girlfriend, police said Friday, in a case expected to be one of the first violations of an anti-stalking law that took effect this week.

The former girlfriend called the police after the man rang the doorbell at her home in Jeonju, about 240 kilometers southwest of Seoul, many times around 1:30 a.m. Thursday. Police who arrived at the scene warned him that he could be punished if he kept doing so and left.

But the man rang the bell again about an hour later, and she called the police.

Police took him into custody at the scene on charges of violating the anti-stalking law that took effect Thursday. He was released after an initial questioning. Police said they have booked him without physical detention and plan to call him in for questioning again.

A stalking crime refers to repeated acts of approaching, following or blocking a victim against his or her will; waiting for or observing a victim in and around his or her residence, workplace or school; sending unwelcome messages, images or videos through mail, telephone or IT networks; and causing anxiety or fear by destroying objects placed around a victim's residence, according to the law. 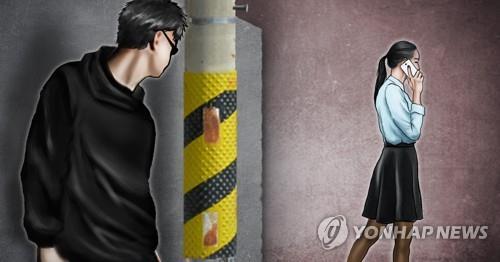