SEOUL, Oct. 22 (Yonhap) -- Hyundai Heavy Industries Co. and other South Korean shipbuilders are expected to hold all the aces in their negotiations with shippers thanks to abundant order backlogs, an industry expert said Friday.

"The abundant order backlogs will help local shipbuilders gain the upper hand in bargaining with shippers and push the prices of ships by reflecting a rise in prices of steel plates," he said. 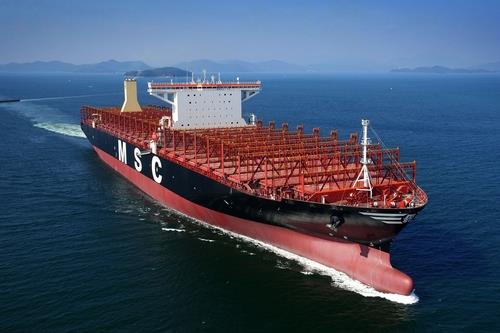 According to data provided by global market researcher Clarkson Research Service, the global order backlogs came to 87.63 million CGTs at the end of September, up 1 percent from the previous month.

The cumulative new orders of South Korean shipbuilders in the first nine months reached 14.57 million CGTs, up more than fourfold from the same period a year ago, the report said.

Clarkson's Newbuilding Price Index, indicating price changes in newly built ships, rose to an average of 149.1 in the third quarter, up 7.4 percent from the end of the previous quarter, the report added.

The report predicted local shipbuilders to bag new orders of a total of 17 million CGTs in 2021, nearly doubling from a year ago.