SEOUL, Oct. 24 (Yonhap) -- The U.S. point man on North Korea said Sunday that he looks forward to continuing exploring different options with South Korea to resume dialogue with Pyongyang, including the proposed declaration of a formal end to the 1950-53 Korean War.

Sung Kim, special representative for North Korea, also reiterated Washington's willingness to help address the North's humanitarian concerns for its people in need, especially amid the COVID-19 pandemic, speaking to reporters right after a meeting here with his South Korean counterpart, Noh Kyu-duk.

He also called on Pyongyang to stop "provocations" and other destabilizing activities, and return to dialogue.

Their talks in Seoul came after tensions resurfaced following the North's recent test-firing of a new submarine-launched ballistic missile (SLBM). They met in Washington last week -- a sign of stepped-up diplomacy to resume dialogue with the North.

"I look forward to continuing to work with special representative Noh to explore different ideas and initiatives, including the ROK's end-of-war proposal as we continue to pursue our shared objectives on the peninsula," Kim said. ROK stands for South Korea's official name, Republic of Korea. 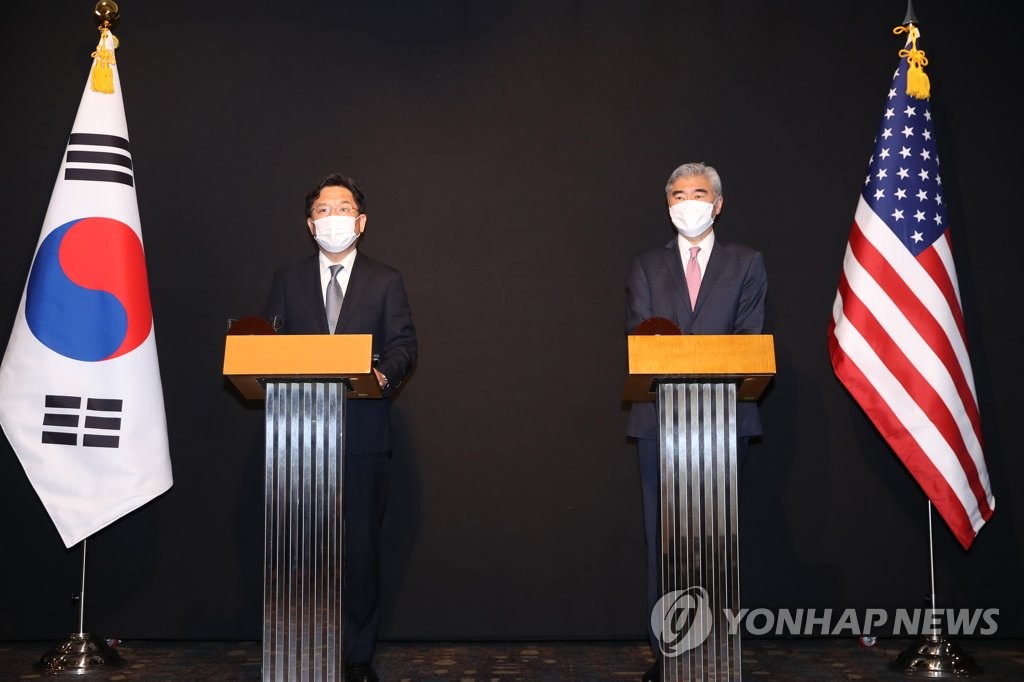 Calling the latest SLBM test "concerning and counterproductive," he highlighted Washington's "strong commitment" to the defense of the South and exploring "sustained and substantive" diplomacy with the North.

Kim described the latest launch as a breach of multiple U.N. Security Council resolutions but underlined the Joe Biden administration's desire to reengage with the North.

"We remain ready to meet with the DPRK without preconditions, and we have made clear that the United States harbors no hostile intent towards the DPRK," he said, referring to the North's official name, Democratic People's Republic of Korea.

"We hope the DPRK will respond positively to our outreach," he added.

Upon Kim's trip here, keen attention was drawn to whether he will shine more light on the U.S. position about President Moon Jae-in's recent proposal for the end-of-war declaration, but he didn't elaborate further.

Kim's characterization of the North's latest SLBM test as a "provocation" came as Pyongyang demanded Seoul and Washington drop what it terms "double standards" in reference to the allies casting the North's missile launches as provocations while justifying their own as "deterrence."

Noh said the latest security situation on the Korean Peninsula underscored the urgent need for resuming talks North Korea, and Seoul and Washington are ready to discuss any issues at the negotiating table if the North accepts their talk offer.

"We reaffirmed the earlier stance that (Seoul and Washington) can discuss any issue if it returns to the negotiating table," Noh said. "As the U.S. government from various levels has been continuously expressing willingness for talks, I hope the North Korean side promptly accepts the offer."

North Korea remains unresponsive to U.S. overtures. It has also stayed away from talks with the U.S. since the Hanoi summit in 2019 between the U.S. and North Korea ended without a deal.

The Seoul official said Kim and he discussed various ways to resume the peace process, including the end-of-war declaration and humanitarian assistance.

"Kim and I had serious and in-depth consultations over the end-of-war proposal as part of extended discussions in Washington," Noh said. "We agreed to continue to push for various ways to engage with North Korea, including cooperation in humanitarian cooperation and meaningful trust-building measures."

Noh said the two sides will have additional consultations at an early date on North Korea.

The U.S. envoy is scheduled to depart Seoul later in the day for Jakarta, where he doubles as ambassador.