SEOUL, Oct. 24 (Yonhap) -- K-pop superband BTS was set to hold an online concert, "BTS Permission To Dance On Stage," on Sunday, featuring cutting-edge visual effects, according to its management agency.

The seven-piece act's performance on a scale equivalent to an offline concert will be livestreamed from a local stadium, starting at 6:30 p.m., Big Hit Music said. It is BTS' first global online concert in about a year.

The agency said powerful visual effects will help the audience enjoy computer-generated visual effects and images shown on large LED screens at the stadium through their devices at home simultaneously.

A multi-view live streaming service will be also available for them to select and enjoy various scenes taken from six different angles on a real-time basis, it added.

The upcoming online event is taking place after the seven-piece act scrapped its planned world tour, "BTS Map of the Soul Tour," due to the COVID-19 pandemic. 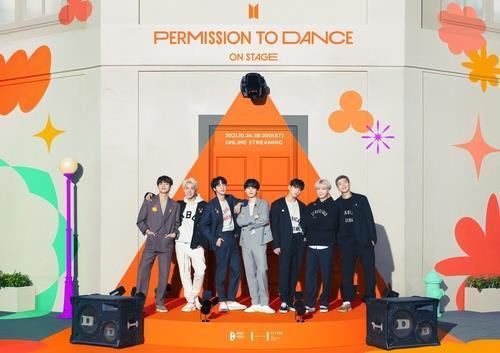