The country's relative poverty rate, referring to the percentage of people with an income below 50 percent of the median income, came to 16.7 percent in 2018-19, according to the data from the Organization for Economic Cooperation and Development (OECD).

It is the fourth-highest rate among 37 member countries of the Paris-based club of rich nations. South Korea's figure is 5.6 percentage points higher than the OECD average of 11.1 percent.

Costa Rica has the highest relative poverty rate of 20.5 percent, followed by the United States with 17.8 percent and Israel with 16.9 percent.

The poverty rate among South Koreans aged 65 and older stood at 43.4 percent in 2018, the highest among OECD members and about three times the OECD average.

Asia's fourth-largest economy became an aged society in 2017, when the proportion of those aged over 65 years reached over 14 percent of its entire population.

The number is projected to reach 10.51 million in 2025, or 20.3 percent of the total population, putting the country on the threshold of a super-aged society where at least 21 percent of its people are 65 and older. 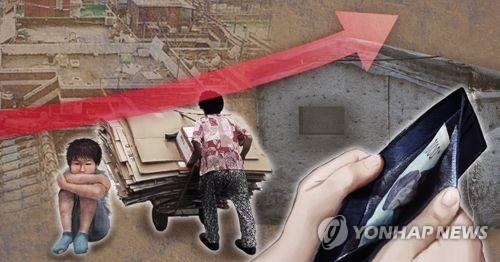