NEW YORK, Oct. 25 (Yonhap) -- Donald Gregg, a former U.S. ambassador to South Korea, stressed that the United States should take a more proactive approach to resume talks with North Korea and break the impasse in the Korean peace process.

Gregg, who served in the South Korean embassy from 1989 to 1993 and is known for expertise on regional security issues, said the Joe Biden administration is in a more advantageous position than the Kim Jong-un regime and that's why Washington should first reach out to Pyongyang.

"I hope the Biden administration will really become more dynamic, take more risks, take more imaginative steps," the 94-year-old retired diplomat said in a recent interview with Yonhap News Agency at his home in Armonk, New York. "(North Korean leaders) have a very difficult hand of cards to play, but they've tried to do a good job ... We need to reach out to them."

Gregg, who also worked as a Central Intelligence Agency officer and visited North Korea six times, emphasized the need for efforts to build trust with Pyongyang to kickstart the long-stalled peace process, calling on the Biden administration to become more "confident" and "muscular."

"Trust is the foundation of the kind of negotiation we need to have," he said. "You don't get trust by just sort of sitting there with your arms folded, saying well, you'll do this and then maybe we'll do that. I mean you don't get that." 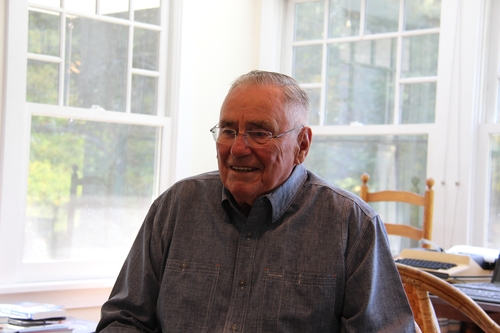 He added Pyongyang may want sanctions relief and good relations with the U.S. in return for giving up its weapons program as the regime clearly knows that its nuclear weapons cannot strike the U.S., which would lead to its demolition by an overwhelming military power.

"I think they know that if they use that power, they would be destroyed by us. They know that, so they're not going to do that," he said. "We need to say that we want to have a good relationship with you."

In regard to Seoul's proposal for a declaration to formally end the 1950-53 Korean War, Gregg said there have not yet been "real discussions" in the U.S. and a careful approach is needed to figure out implications on the divided peninsula.

Last month, President Moon Jae-in used his U.N. National Assembly speech to again propose the end-of-war declaration as part of initial steps towards the denuclearization of Korea and lasting peace.

The war ended in a truce, not a peace treaty, leaving the two Koreas technically at war.