SEOUL, Oct. 25 (Yonhap) -- South Korea will once again call for international discussions on Japan's plan to discharge radioactive water from its crippled Fukushima nuclear power plant into the ocean at this week's international maritime gathering, the oceans ministry said Monday.

During the London Convention and Protocol meeting set to begin on the day, the ministry will raise the need to discuss Japan's planned disposal within the Protocol framework, and urge Japan to disclose related information in a full and transparent manner.

The meeting will be held via teleconferencing and continue through Friday.

"We will continue to bring up the issue to raise the awareness of the international community about its potential negative impacts on the maritime environment, and to seek ways to deal with the waste water safely," a ministry official said.

Earlier this month, Japan finalized plans to start discharging the radioactive waste water stored in tanks at the Fukushima Daiichi Nuclear Power Plant into the Pacific Ocean in 2023. More than 1.2 million tons of tritium-laced water is expected to be disposed.

South Korea has urged Japan to have in-depth discussions with neighboring countries before pushing ahead with the plan, and has been working to garner international support for seeking alternatives.

In August, the Seoul government submitted a document to the London Protocol secretariat that suggests the formation of a task force in charge of the Fukushima issue.

Japan has insisted that the matter is not subject to discussions under the Protocol. But many nations and international organizations have voiced concerns.

The London Protocol calls for banning all dumping, with some exceptions. It has 53 signatories, including South Korea which joined it in 2009. 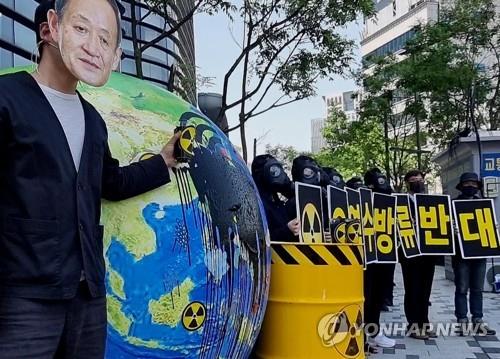