SEOUL, Oct. 25 (Yonhap) -- Lee Jae-myung, the presidential nominee of the ruling Democratic Party (DP), is ahead of both the leading contenders of the main opposition party in hypothetical two-way matchups, a poll showed Monday.

Lee, who announced his resignation as Gyeonggi governor earlier in the day, beat former prosecutor general Yoon Seok-youl of the People Power Party (PPP) 37.5 percent to 33.6 percent, according to the survey of 1,005 adults conducted Friday and Saturday by the Korea Society Opinion Institute (KSOI). 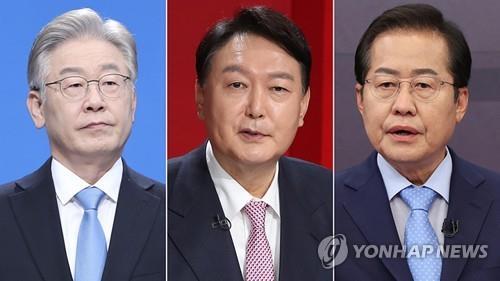 The difference was within the margin of error of plus or minus 3.1 percentage points at the 95 percent confidence level.

Lee Kang-yun, head of the KSOI, said Yoon appeared to have lost support due to controversy last week over his apparent praise of former dictator Chun Doo-hwan and the subsequent posting of a photo that critics slammed as Yoon's likening of the people to a dog.