Trade Minister Yeo Han-koo and his Cambodian counterpart, Pan Sorasak, officially signed the pact during a virtual ceremony earlier in the day, according to the Ministry of Trade, Industry and Energy.

South Korea struck the deal with Cambodia in February this year and wrapped up domestic procedures, including parliamentary approval.

Under the agreement and the envisioned multilateral trade pact of Regional Comprehensive Economic Partnership (RCEP), Cambodia will lift tariffs on 93.8 percent of all products traded, and South Korea will remove tariffs on 95.6 percent of all items, according to the ministry.

"The FTA is expected to boost our access to the Mekong River market and to strengthen our value chain, as Cambodia is the hub of the region and bears great economic growth potential," the ministry said in a release.

The latest trade deal is part of Seoul's ongoing push to expand trade ties with ASEAN and other emerging nations to diversify its trade portfolio and reduce reliance on China and the United States. 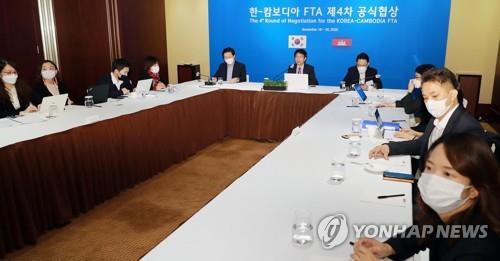