SEOUL, Oct. 26 (Yonhap) -- South Korea's economy is estimated to have grown at a slower pace in the third quarter amid slumping private consumption and investment, central bank data showed Tuesday, raising worries it will not be able to achieve an earlier projected growth outlook of 4 percent for this year.

Gross domestic product expanded 0.3 percent in the July-September period, down from a 0.8 percent gain tallied in the second quarter. From a year earlier, the economy grew 4 percent, according to data by the Bank of Korea.

The third-quarter figure clouded the prospect for the South Korean economy to achieve a 4 percent growth outlook projected by the BOK in August. The central bank has said that the projected growth can be attained if the economy expands by more than 0.6 percent on-quarter in both the third and fourth quarters. 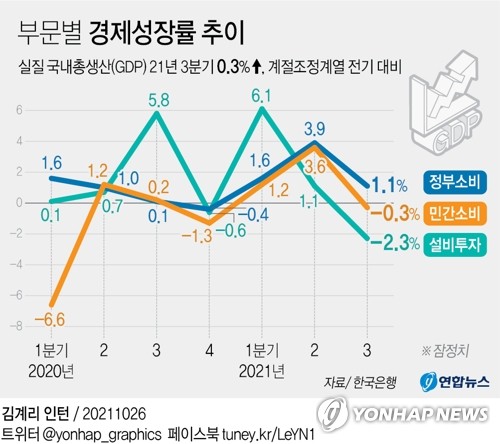 Weak private consumption weighed on the economy affected by less spending amid the coronavirus-prompted restrictions on gatherings and business operation.

Private consumption declined 0.3 percent on-quarter in the third quarter, a turnaround from a 3.6 percent rise in the previous quarter.

Investment in facilities dropped 2.3 percent compared with a 1.1 percent gain in the second quarter. Investment in construction contracted 3 percent over the same period, the data showed.

Exports rebounded 1.5 percent thanks to brisk overseas sales of coal, oil and machinery products, while imports fell 0.6 percent over the cited period, according to the data.

South Korea has striven to boost the economy under the strain of its prolonged fight against the coronavirus.

The government has drawn up two rounds of extra budgets totaling some 50 trillion won this year to provide support to small merchants and vulnerable people.

South Korea is also set to introduce a new scheme, dubbed "Living with COVID-19," next month under which COVID-19 will be treated as an infectious respiratory disease, like seasonal influenza, with eased distancing being implemented.

The BOK remained optimistic that South Korea will be able to achieve the 4 percent growth projection for this year despite various uncertainties as consumption will likely rebound thanks to less restrictive antivirus measures and the effect of the extra budgets.

"Though global supply disruptions, heightened uncertainty over the Chinese economy and rising energy prices could remain as risk factors, the expanded vaccination, change in antivirus measures and the impact of the second extra budget will serve as positive factors that will sustain (economic) recovery," Hwang Sang-pil, a senior BOK official, said in a press briefing.

The official added that the BOK will maintain its earlier projected economic growth of 4 percent for this year, saying that it can be reached should the economy grow by about 1 percent on-quarter in the last three months.