SEOUL, Oct. 26 (Yonhap) -- The value of derivatives-tied securities issued in South Korea plumbed a near eight-year low in the first half of the year amid the bullish run of major global stock markets, data showed Tuesday.

The amount of equity-linked securities (ELS) and derivatives-linked securities (DLS) outstanding came to 80.2 trillion won (US$68.5 billion) as of end-June, the lowest level since the end of 2013, according to the data from the Financial Supervisory Service.

Those products are structured to track the performance of underlying assets but do not guarantee the principle, as investors prefer instruments that promise higher yields. 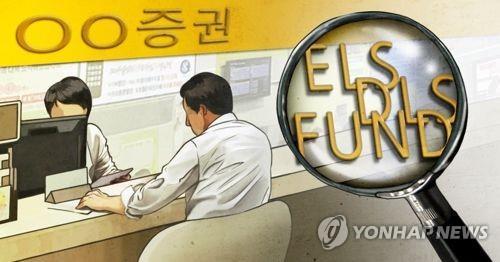 The outstanding value of ELS stood at 53.3 trillion won at the end of June, down 31 percent from a year earlier.

ELS refers to hybrid debt securities whose returns are determined by the performance of benchmark stock indexes, including the Korea Composite Stock Price Index (KOSPI) 200.

The value of outstanding DLS instruments, which track interest rates, currency values and other underlying assets, amounted to 26.9 trillion won, down 11.4 percent from a year earlier.

The financial watchdog said the drop in the outstanding value of ELS and DLS came as major stock indexes in the world rose, resulting in increased early redemption.

The average annual return rate of ELS and DLS edged down from a year earlier to 3.1 percent and 0.2 percent, respectively, according to the data.
(END)