SEOUL, Oct. 26 (Yonhap) -- Having recently failed in their bid to win three major titles this year, South Korean football club Ulsan Hyundai FC will try to stay in the hunt for two trophies this week.

Ulsan, currently in second place in the top-flight K League 1, will host the K League 2 club Jeonnam Dragons in the semifinals of the Korean FA Cup on Wednesday. The kickoff at Munsu Football Stadium in Ulsan, some 415 kilometers southeast of Seoul, is 7 p.m.

The other semifinal contest, between Gangwon FC and Daegu FC, will also start at 7 p.m. Wednesday at Songam Sports Town in Chuncheon, about 85 kilometers east of the capital. 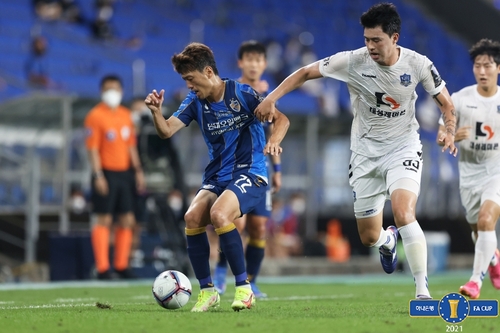 Only last week, Ulsan harbored dreams of pulling off a "treble," or winning three major trophies in one football season. No South Korean club has accomplished the feat, which is so rare that only a select few, such as FC Barcelona, Manchester United and Inter Milan, have done it in other continents.

But as of Tuesday, there is a distinct possibility that Ulsan may end up with zero titles.

Ulsan entered the semifinals of the Asian Football Confederation (AFC) Champions League last Wednesday as the favorites against Pohang Steelers, but lost that match on penalties. 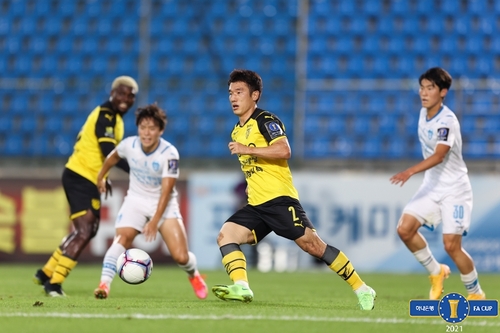 Jeonbuk and Ulsan have the exact same record at 18 wins, 10 draws and five losses. But Jeonbuk own the tiebreak edge in the goals scored department, 58-54, with five matches to play this season.

Ulsan finished runners-up to Jeonbuk in each of the past two seasons, and memories of coming up short against the rivals in the final stretch are still too fresh on the minds of many Ulsan players.

Jeonbuk got the better of Ulsan in last year's FA Cup final, too, beating them 3-2 on aggregate.

This year, Jeonbuk are out of the way, having lost in the round of 16, and Ulsan have to take care of business against Jeonnam, currently fourth in the K League 2, to reach their second consecutive final.

As the only second division club remaining in the FA Cup, Jeonnam will be playing with house money.

Jeonnam are already locked into the first round of the promotion playoff in the K League 2 as the fourth seed, with one match remaining. They can afford to go all-in on the FA Cup contest Wednesday without worrying about the K League 2 season finale on Sunday. 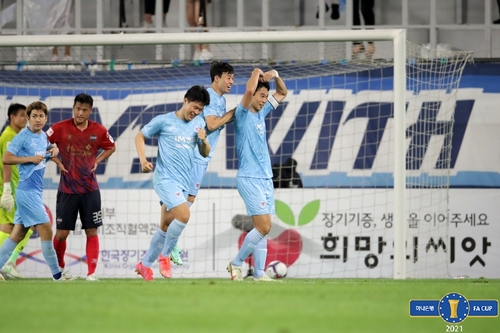 Ulsan have played three grueling matches over the past nine days -- an extra-time win over Jeonbuk in the AFC Champions League quarterfinals, the shootout loss to Pohang in the semifinals and then the K League loss to Seongnam.

Jeonnam, on the other hand, are well rested. Their leading scorer, Jonathan Balotelli, didn't play over the weekend and will be licking his chops over a tired Ulsan defense. Franchise star Lee Jong-ho has scored three of his eight goals for the year in October.

Ulsan head coach Hong Myung-bo said he expected a tightly-contested match but added his team will find a way to score against a stout Jeonbuk defense.

"Given our depth, anyone can step up and score," Hong said, in an interview transcript provided by the Korea Football Association. "I've been stressing the importance of the FA Cup to my players all season. We absolutely want to win this title for our fans."

"We don't have a lot of firepower, but if we can hold our ground and push back on defense, we'll have our chance to score," Jeon said. "We have to focus on our strengths on defense and try to exploit Ulsan's weaknesses."

Daegu FC are enjoying a solid campaign. They are in third place in the K League 1 -- albeit with virtually zero chance of catching either Ulsan or Jeonbuk -- and are one win away from just their second FA Cup final.

In their first trip to the final in 2018, Daegu FC pounced Ulsan 5-1 on aggregate for their only FA Cup title so far.

Daegu head coach Lee Byung-geun wasn't on the bench three years ago, but said this year's squad is just as talented as the 2018 team.

"Our players are extremely motivated to win the FA Cup," Lee said. "Gangwon will be a pesky opponent, and we'll approach this match like the championship final."

Gangwon FC, 10th among 12 clubs in the K League 1, are just five points out of the relegation spot, but can still salvage their season at the FA Cup.

"It's been a long season for us, and I think my players deserve to be rewarded for all they've gone through so far," Gangwon head coach Kim Byung-soo said. "It will mean a lot to the whole team if we can get to our first FA Cup final."

The FA Cup winners will qualify for the AFC Champions League for the following year. 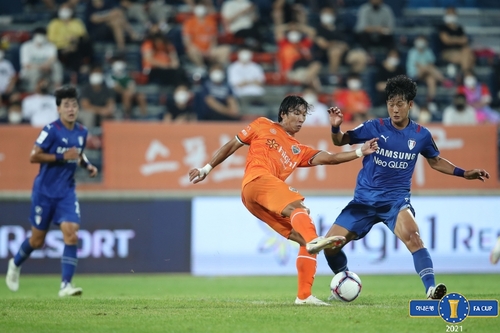