SEOUL, Oct. 26 (Yonhap) -- South Korea and Chile will hold their sixth round of negotiations this week on updating their bilateral free trade agreement (FTA) that went into effect in 2004, Seoul's trade ministry said Tuesday.

The three-day talks, set to begin later in the day via teleconferencing, will focus on expanding the scope of free trade and updating terms of the 15-year-old FTA to better reflect changing trade and economic circumstances, according to the Ministry of Trade, Industry and Energy.

The two held the first round of discussions for revision in November 2018 in Seoul, with the last talks taking place in June this year.

"We will do our best to further cement bilateral economic relations by successfully wrapping up the negotiations," Seoul's lead negotiator Lee Kyung-sik said.

Chile was South Korea's first FTA partner, and the bilateral FTA has served as a springboard for South Korean firms seeking to tap the Central and South American markets. 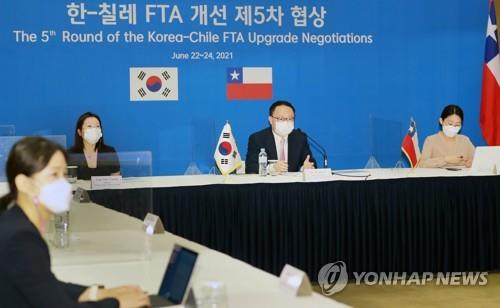 S. Korea, Chile to hold 6th round of talks on amending FTA

S. Korea, Chile to hold 6th round of talks on amending FTA