SEOUL, Oct. 26 (Yonhap) -- President Moon Jae-in held a meeting with presidential nominee Lee Jae-myung of the ruling Democratic Party (DP) on Tuesday in a move that could help solidify Lee's standing within the party after a bitter primary.

The tea meeting at Cheong Wa Dae came 16 days after Lee was nominated as the DP's presidential candidate on Oct. 10. It also came a day after Lee announced his resignation as Gyeonggi Province governor to focus on the presidential election scheduled for March 9.

Political parties are closely watching the meeting as to whether Moon and Lee will discuss sensitive issues like the corruption scandal surrounding a land development project undertaken in the city of Seongnam when Lee was its mayor.

The opposition party accuses Lee of wrongdoing and is calling for an independent counsel investigation.

Presidential officials said, however, that the two are unlikely to discuss any political or election issues because the president is required to remain politically neutral ahead of elections regardless of party affiliation.

Tuesday's meeting with Moon is expected to help Lee gain united support from the ruling party as the presidential nominee seeks to form an integrated team for his campaign in the wake of intense competition during the primary.

On Sunday, Lee met with former Prime Minister Lee Nak-yon, the runner-up in the DP presidential primary, and secured the former prime minister's promise to help Lee's campaign as an adviser.

Lee, however, continues to be dogged by questions about his possible involvement in the snowballing corruption scandal surrounding an apartment development project conducted in Seongnam in 2015 when he was the city's mayor. 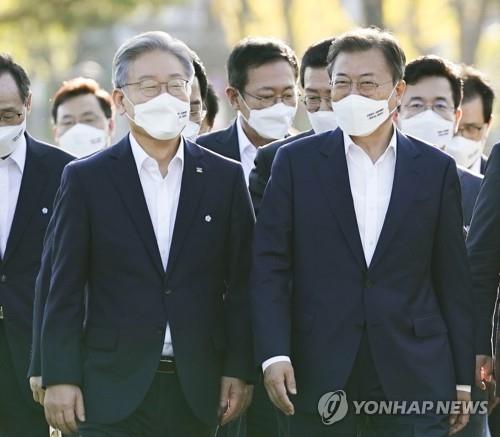