SEOUL, Oct. 26 (Yonhap) -- President Moon Jae-in met with Lee Jae-myung, presidential nominee of the ruling Democratic Party, on Tuesday, offering words of advice and exchanging pleasantries in a move that could help solidify Lee's standing within the party after a bitter primary.

The 50-minute tea meeting at Cheong Wa Dae came 16 days after Lee was nominated as the DP's presidential candidate on Oct. 10. It also came a day after Lee announced his resignation as Gyeonggi Province governor to focus on the presidential election scheduled for March 9.

Congratulating Lee on his nomination as the DP's presidential candidate, Moon asked Lee to "develop a lot of good policies during the process of the presidential election and engage in competition in good faith for policies," according to presidential officials.

Moon said he wants to offer the same words to opposition candidates as well.

Lee emphasized he is also a "member" of the Moon administration, a remark seen as aimed at winning the minds of supporters of Moon after the intensely fought primary in which he beat former Prime Minister Lee Nak-yon supported by the party's mainstream faction aligned with Moon.

"I will do my best for the success of the Moon Jae-in government," Lee said.

The atmosphere at the 50-minute meeting was amiable with Moon and Lee discussing various issues, including climate change and Moon's Monday budget speech, officials said. 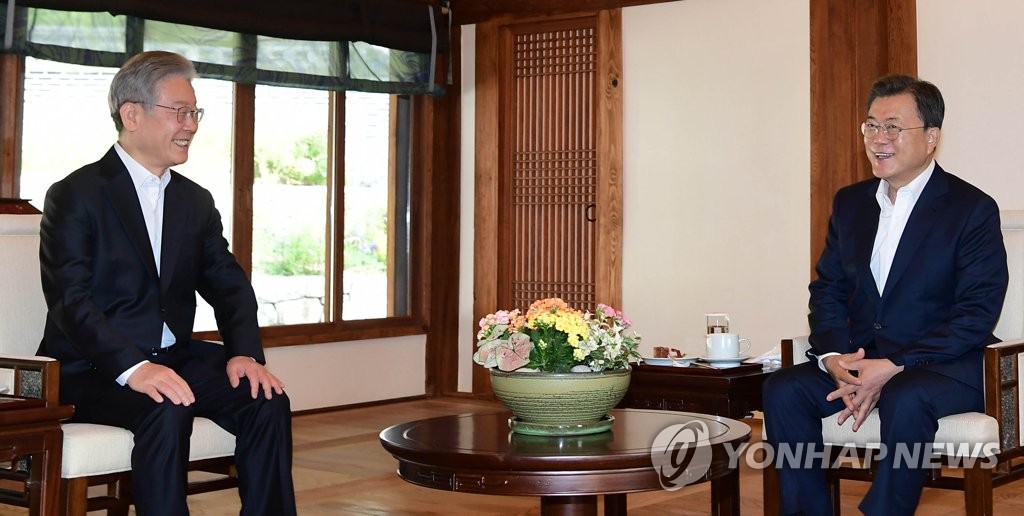 Political parties closely watched the meeting as to whether Moon and Lee would discuss sensitive issues like the corruption scandal surrounding a land development project undertaken in the city of Seongnam when Lee was its mayor.

But presidential officials said the issue did not come up during the meeting.

Tuesday's meeting with Moon is expected to help Lee gain united support from the ruling party as the presidential nominee seeks to form an integrated team for his campaign in the wake of intense competition during the primary.

On Sunday, Lee met with former Prime Minister Lee Nak-yon, the runner-up in the DP presidential primary, and secured the former prime minister's promise to help Lee's campaign as an adviser.

Lee, however, continues to be dogged by questions about his possible involvement in the snowballing corruption scandal surrounding an apartment development project conducted in Seongnam in 2015 when he was the city's mayor.