SEOUL, Oct. 26 (Yonhap) -- South Korea's exports are expected to rise over 26 percent on-year this month on the back of robust demand for chips and automobiles, a poll showed Tuesday.

Exports are forecast to reach US$54.18 billion in October, marking a 26.14 percent on-year growth, according to the survey of six brokerage houses by Yonhap Infomax, the financial news arm of Yonhap News Agency.

Imports are anticipated to advance 38.59 percent on-year in October to $54.18 billion, resulting in a trade surplus of $2.36 billion, the survey showed.

In September, the country's exports have extended their gains to 11 months by rising 16.7 percent to $55.8 billion, government data showed.

Experts attributed the solid export growth in September to robust demand for chips, petroleum products and autos amid the global economic recovery from the COVID-19 pandemic.

"Despite a global supply glut, demand from major countries remains strong. The growth is likely to slow down, but it won't be drastic, and the sheer amount of exports is quite high," said Jeon Kyu-yeon, an expert from Hana Financial Investment Co.

The government will release the official trade data Monday. 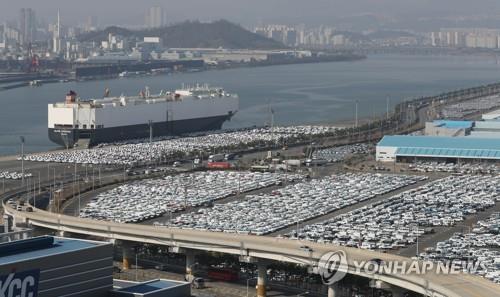