SEOUL, Oct. 27 (Yonhap) -- South Korea lost to the United States 6-0 in the last of their two women's football friendly matches on American soil, unable to put up much of a fight against the top-ranked opponent.

Five players had a goal apiece for the U.S. in their resounding victory at Allianz Field in St. Paul, Minnesota, on Tuesday (local time), with South Korean midfielder getting an own goal late in the first half. South Korea fell to four draws and 11 losses all time against the U.S. 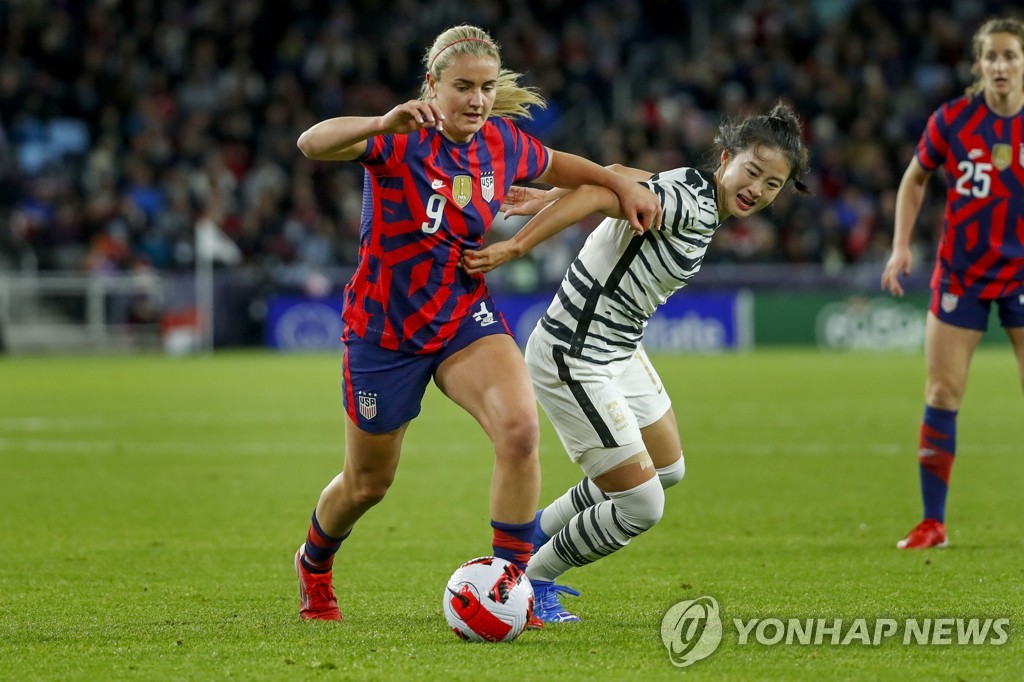 South Korea, ranked 18th, held the mighty Americans to a scoreless draw in their previous meeting last Thursday in Kansas City. Goalkeeper Yoon Younggeul was the biggest star, making eight saves, most of them with a high degree of difficulty, to snap the U.S. home winning streak at 22 matches.

South Korea coach Colin Bell started Kim Jung-mi in goal for this one, and Kim took on a much more lethal U.S. attack than what she saw from the bench last week.

The U.S. opened the scoring in the ninth minute, when Lindsey Horan's shot went off a South Korean defender and floated over goalkeeper Kim Jung-mi. 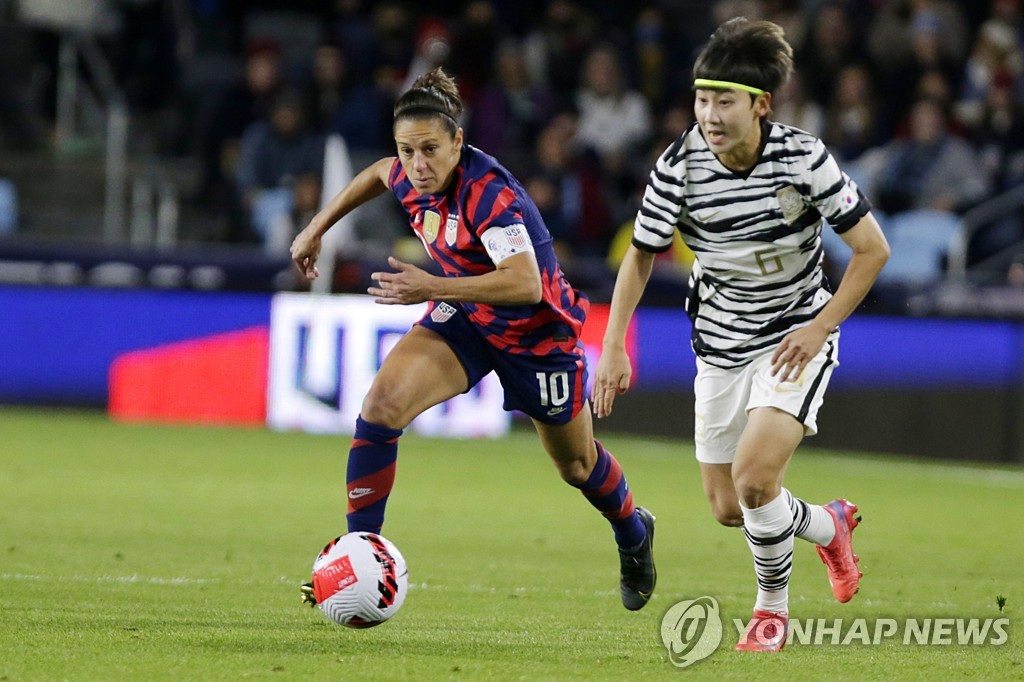 The U.S. captain Carli Lloyd, playing in her 316th and final international match, nearly got her 135th goal in the 27th minute, as a curler from the top of the box got turned aside by the diving Kim.

The U.S. doubled their lead just a couple of minutes before halftime, with Andi Sullivan's header going in off Cho. Sullivan was initially credited with the goal but the play later changed to Cho's own goal.

South Korea's first shot of the match came four minutes into the second half. as Ji So-yun tested goalkeeper Jane Campbell with a right-footed shot from outside the box.

Lloyd had another good look at the net in the 53rd minute, though her header was stopped by Kim Jung-mi after bouncing in front of the Korean goalkeeper. 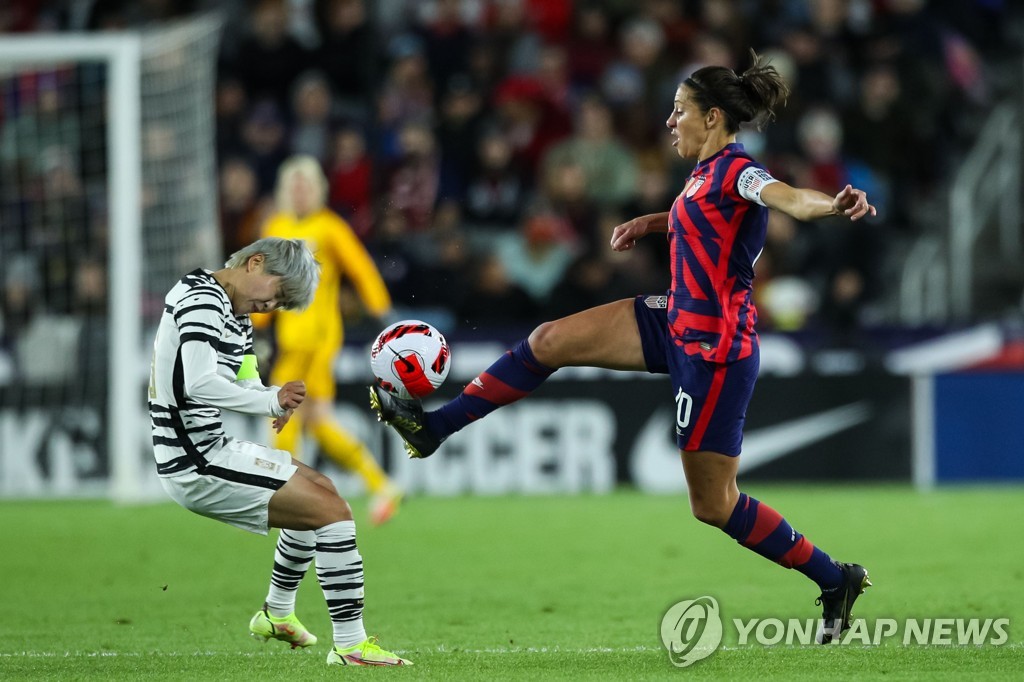 Lloyd was taken out in the 65th minute in an emotional sendoff, with the crowd chanting "Thank you, Carli!" to bid adieu to the teary 39-year-old forward.

Alex Morgan came on for Lloyd and scored the third U.S. goal some four minutes later, set up by Megan Rapinoe's throughball.

Rapinoe got on the scoresheet herself in the 85th minute, and Rose Lavelle and Lynn Williams each scored in the final moments to cap off the rout.

The U.S. had 29 shot attempts to South Korea's two, and put 13 shots on target compared to just one by South Korea.

South Korea scheduled these two matches in preparation for the Asian Football Confederation (AFC) Women's Asian Cup kicking off in January in India. The Taeguk Ladies have never won the continental event, which has been dominated recently by Japan and Australia. 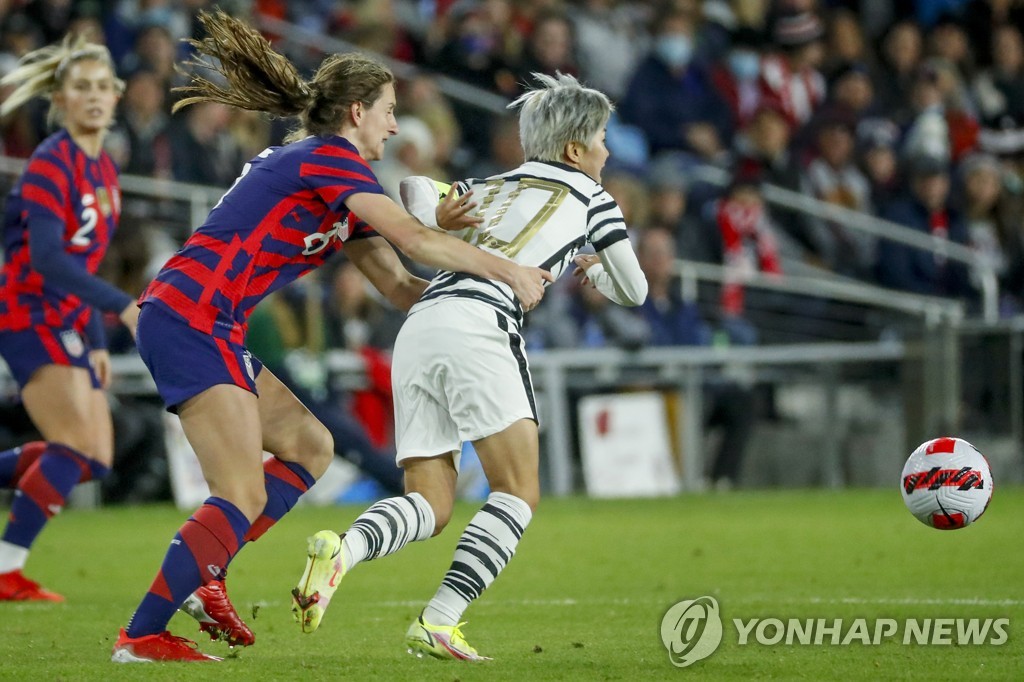