Chung Eui-yong made the remarks after talks with his Russian counterpart, Sergei Lavrov, in Moscow, as Seoul has been stepping up diplomacy to revive its drive to resume dialogue with North Korea and lay the groundwork for lasting peace on the divided peninsula.

"The two countries shared the view on the urgency of the North Korean nuclear issue and agreed to closely communicate and cooperate at each level for an early resumption of the Korean Peninsula peace process," he told a joint press conference.

"Sharing the understanding that the stable management of the situation on the Korean Peninsula is more important than anything, the countries exchanged opinions on various ways to cooperate for a swift resumption of dialogue with North Korea," he added.

Lavrov stressed the importance of a "diplomatic solution" to issues concerning the Korean Peninsula.

"We believe that a diplomatic solution should be possible and talks should be resumed by all parties concerned," he said during the press conference livestreamed on YouTube by Ruptly, a Russian media outlet. His speech in Russian was interpreted into English.

"We should understand that the search for a long-term comprehensive solution should cover the whole range of issues of the Korean Peninsula, and we need to ensure no factors intervene (to) increase tensions," he added.

During the press availability, Chung expressed appreciation for Moscow's continued support for better inter-Korean relations and called for its "constructive" role in the peace efforts. 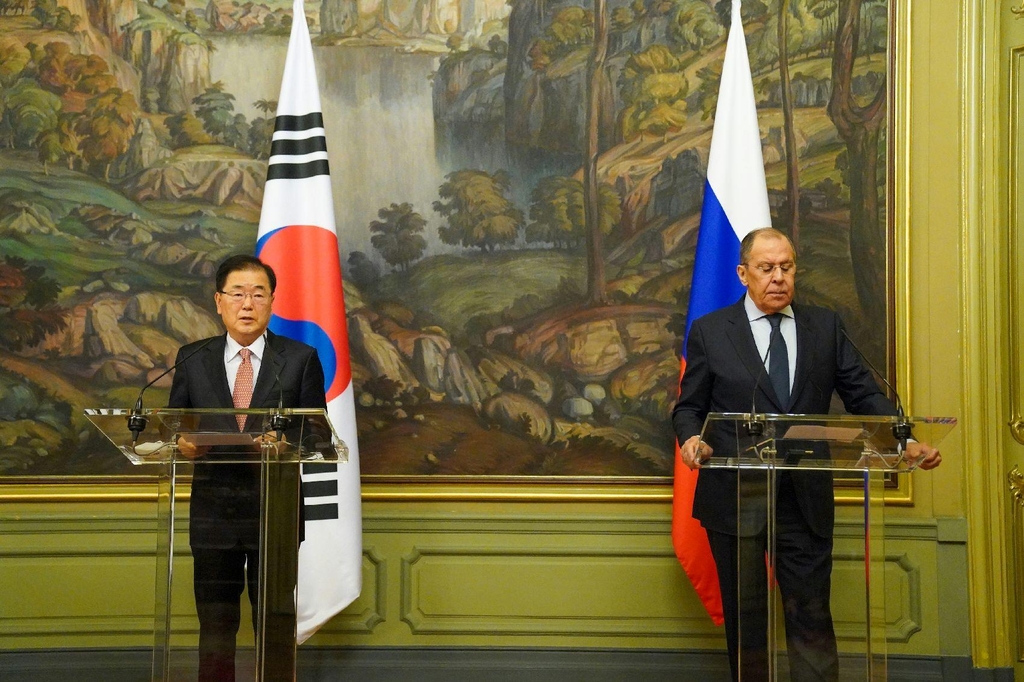 South Korea has intensified diplomacy with the United States, Japan and China in the wake of a series of recent North Korean missile launches, which Seoul stressed underscore the pressing need for the resumption of dialogue with Pyongyang.

To encourage the North's return to dialogue, the South has been pushing for the political declaration of a formal end to the 1950-53 Korean War, pitching it as an effective confidence-building measure with the North.

Seoul has also been discussing with Washington a wide range of potential incentives for dialogue, such as humanitarian support to Pyongyang in areas of anti-virus quarantine, sanitation and safe water.

Later in the day, the ministers will attend a ceremony marking the 30th anniversary of the establishment of bilateral diplomatic ties.