SEOUL, Oct. 27 (Yonhap) -- South Korean stocks retreated Wednesday as investors attempted to cash in gains amid concerns that the corporate earnings may wane after a strong third quarter. The Korean won fell against the U.S. dollar.

Trading volume was moderate at about 598 million shares worth some 10.1 trillion won (US$8.6 billion), with gainers outnumbering losers 626 to 232. 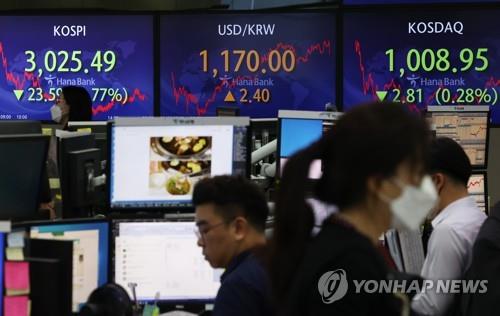 After a weak start, the key stock index lost ground on foreign and institutional sell-offs.

"They seem to be concerned about chances of potential stagflation, a downslide in exports and corporate earnings after peaking in the third quarter of this year," she said.

The local currency closed at 1,170 won against the U.S. dollar, down 2.4 won from the previous session's close.