Under the 50:50 joint venture deal, the two companies will invest over a combined 1 trillion won (US$854.7 million), aiming for annual production of 800 million square meters of separators, the key component used in rechargeable batteries, by 2028, LG Chem said in a press release.

LG Chem said in a regulatory filing it decided at a board meeting on the same day to invest 642.7 billion won, equivalent to about a 70 percent stake.

LG Chem will take over an additional 20 percent stake in the joint venture from Toray, 30 months after the establishment of the plant, it said.

The output from the new plant will be supplied to the Poland-based unit of LG Energy Solution, LG Chem's wholly-owned subsidiary, as well as to other European partners.

The construction will start in the first half of next year, on a site currently used by a Toray affiliate in the northwestern city of Nyergesujfalu.

Through the deal, LG Chem can speed up its efforts to tap deeper into the European market by securing the technology for separator membranes, on top of its enhanced coating technology.

LG Chem currently has a domestic separator coating production line and two others in the Chinese city of Hangzhou and Wroclaw in western Poland.

LG Chem has been ramping up efforts to expand its portfolio into the battery materials business, unveiling a 6 trillion won investment plan by 2025 to focus on cathode materials, separators, anode binders and others.

The company acquired the separator coating division from LG Electronics Inc. in July.

According to global market tracker IHS Markit, the European electric vehicle battery market is projected to grow to 410 gigawatt hours by 2026 in terms of the annual production, or 38 percent growth every year. 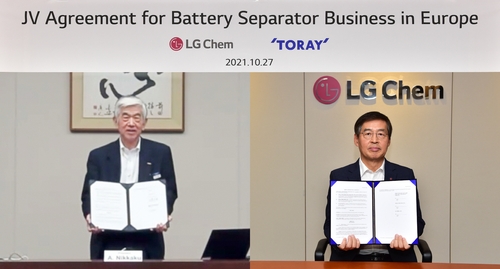