Goals by Lee Jong-ho and Jang Soon-hyeok sent Jeonnam to the final of the Korean FA Cup at Munsu Football Stadium in Ulsan, some 415 kilometers southeast of Seoul, with the home team managing just one goal on a penalty by Valeri Qazaishvili.

In the championship final, Jeonnam will take on Daegu FC, which defeated Gangwon FC 1-0 in the other semifinal match held Wednesday. Jeonnam were the only semifinalist representing the second-tier K League 2, with everyone else competing in the K League 1.

The FA Cup champions will also punch a ticket to the Asian Football Confederation (AFC) Champions League next year. 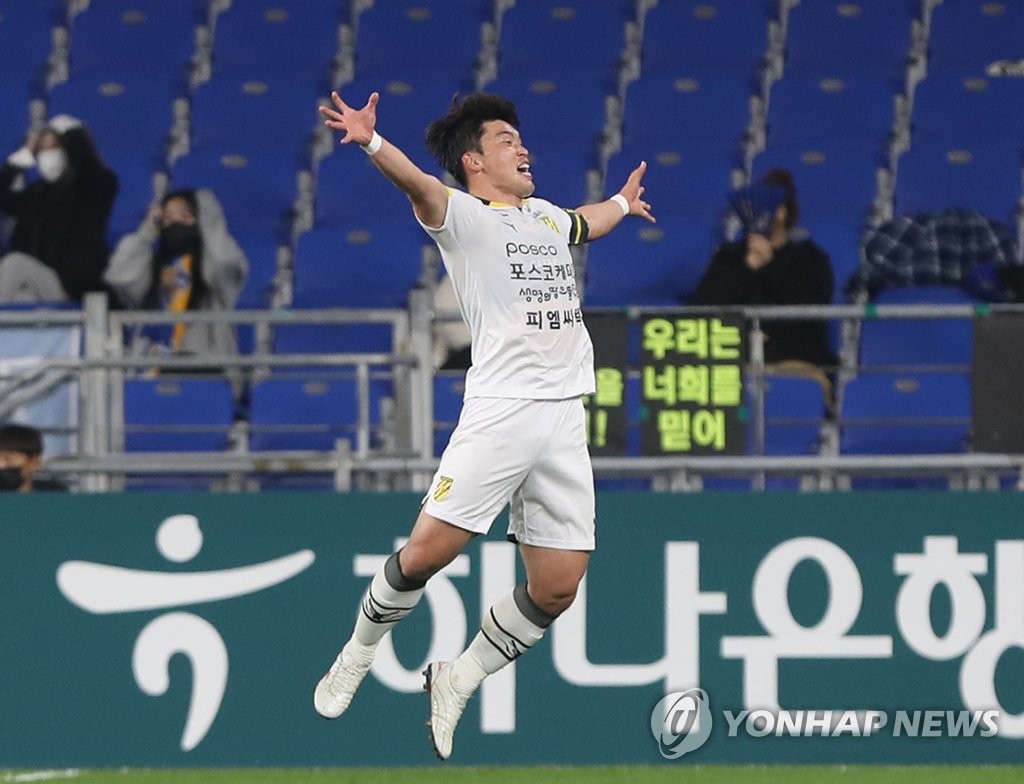 Ulsan were trying to pull off a "double," or capturing two big trophies in the same season. They're currently in second place in the K League 1 with five matches remaining. They're tied with four-time defending champions Jeonbuk Hyundai Motors with 64 points and trail them in goals scored.

They were two wins away from taking home the FA Cup but now face the possibility of ending the season empty-handed. 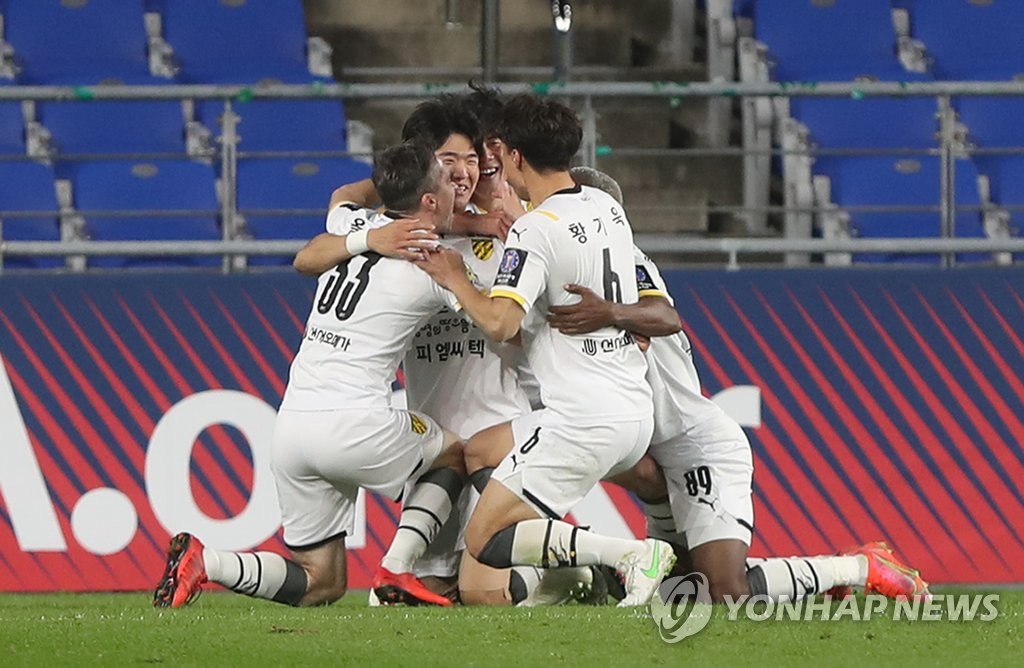 Ulsan even had eyes on a "treble," or capturing three major titles, earlier in the season. But they lost in the semifinals of the AFC Champions League to K League rivals Pohang Steelers last Wednesday.

Ulsan were playing for the third time in eight days Wednesday, and it showed in the first half, as they had trouble containing Jeonnam's pesky attack and breaking through their opponents' dogged defense.

Ulsan's much-maligned set-piece defense cost them in the 21st minute, when Lee Jong-ho headed in a corner taken by Kim Hyeon-ug for a 1-0 Jeonnam lead. 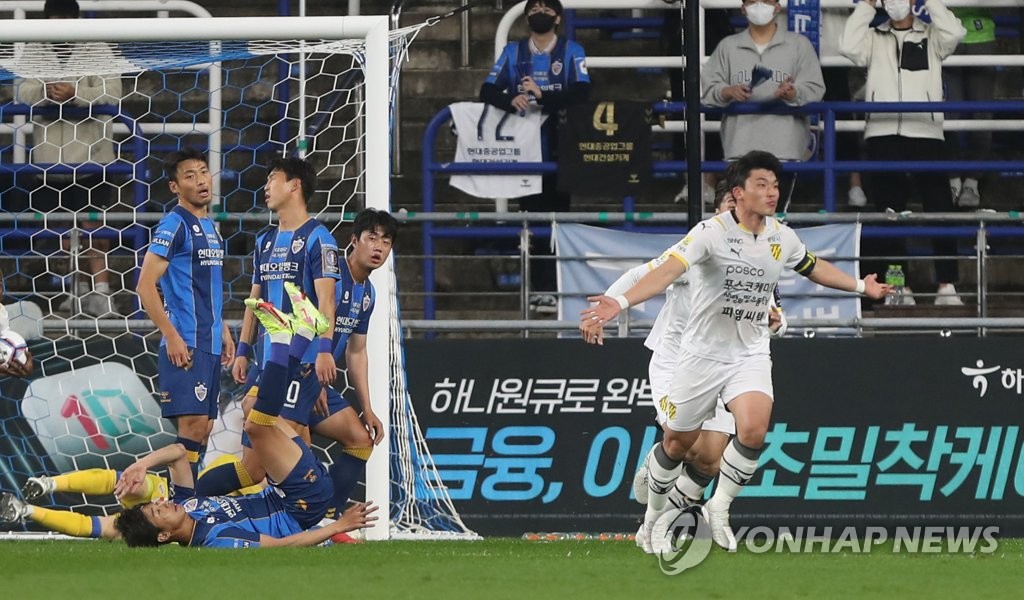 The underdogs went up by two goals three minutes into the second half. Ulsan midfielder Shin Hyung-min had his pocket picked in his own box by Jonathan Balotelli, and the ball found its way to Jang Soon-hyeok, who beat goalkeeper Jo Hyeon-woo with his right foot.

Ulsan wouldn't go away without a fight. Kim Ji-hyun thought he'd cut the deficit in half two minutes later, but the goal was wiped out on an offside call.

Ulsan finally got one back in the 80th minute when Qazaishvili converted a penalty. Over the final dozen or so minutes, Ulsan kept knocking on Jeonnam's door without breaking through, as goalkeeper Park Jun-huk made a few match-saving stops. 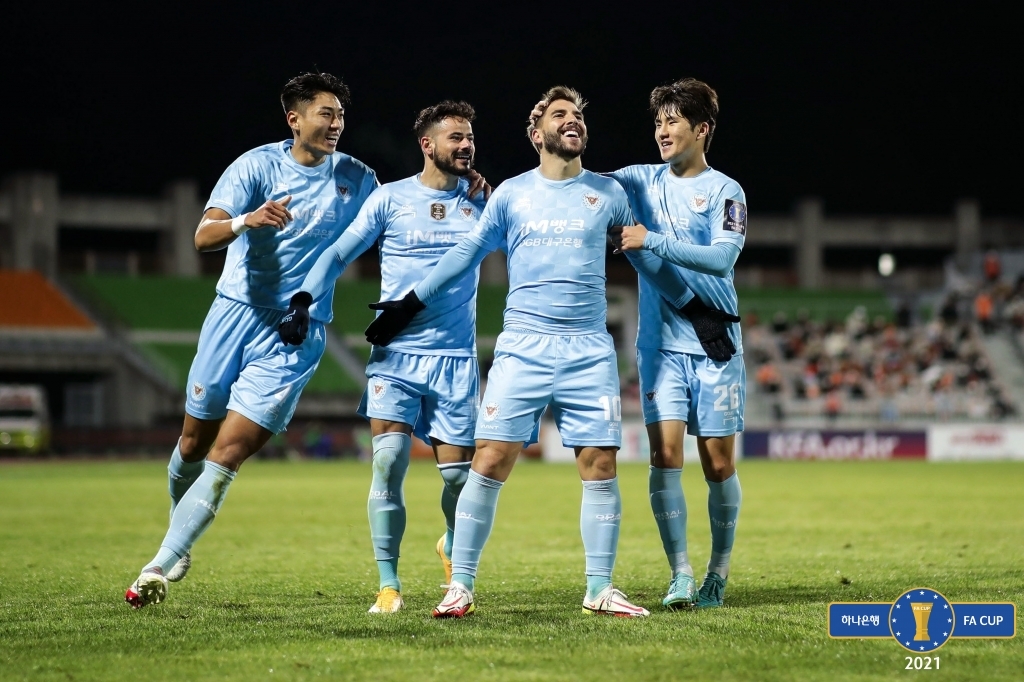 At Songam Sports Town in Chuncheon, about 85 kilometers east of the capital, Bruno Lamas' wonder goal in the 59th minute was all the offense Daegu FC needed.

Lee Keun-ho secured the loose ball after a free kick and teed it up for the Brazilian midfielder, whose cannon of a shot went in off the bottom of the crossbar.

Daegu frittered away a couple of chances to increase their lead. Lee Keun-ho nearly scored one for himself in the 61st minute, but his shot from a two-on-one breakaway found the woodwork. Some two minutes later, Edgar had his penalty saved by Lee Bum-soo.

Daegu barely hung on for the narrow win, with Gangwon pushing back hard in the final moments. Vladimir Siladi just missed the net for Gangwon with an acrobatic volley during injury time, as Daegu hung on for their first trip to the FA Cup final since winning it all in 2018.