SEOUL, Oct. 28 (Yonhap) -- South Korea and the United States may have "somewhat different perspectives" on the issue of declaring a formal end to the Korean War, but the perspectives should not be seen as a "difference of views," a senior Cheong Wa Dae official said Thursday.

Park Soo-hyun, senior Cheong Wa Dae secretary for public communication, made the remark in response to speculation that Washington is reluctant to support President Moon Jae-in's vision for an end-of-war declaration that would jumpstart peace talks with North Korea.

The 1950-53 conflict ended in an armistice, not a peace treaty, leaving the two sides technically at war. 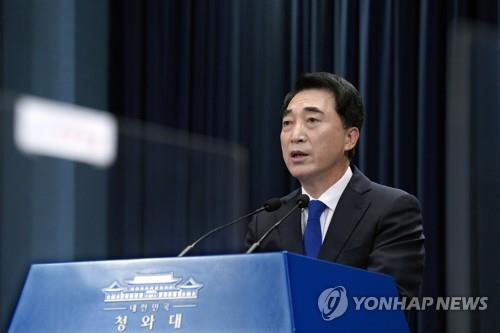 Skepticism about Washington's interest has grown after U.S. National Security Adviser Jake Sullivan said Tuesday that the allies "may have somewhat different perspectives on the precise sequence or timing or conditions for different steps" regarding the resumption of talks with Pyongyang.

"The remarks of U.S. National Security Adviser Sullivan are only to be expected," Park said during a YTN radio interview. "We may have somewhat different perspectives, but I am against interpreting that as a difference of views."

Park also advised against having "hasty" expectations about the government's push to bring lasting peace to the Korean Peninsula, including through an end-of-war declaration with Pyongyang.

"Be it inter-Korean issues or North Korea-U.S. issues, the Korean Peninsula Peace Process must take an extremely careful and gradual path," he said, adding that the allies continue to have in-depth consultations on the subject.

Park declined to elaborate on the prospect of a North Korea visit by Pope Francis amid expectations that the issue will come up during Moon's meeting with the pope at the Vatican later this week.

"This is a diplomatic issue between North Korea and the Vatican," he said.

Still, given that Moon's meeting with the pope will take place on the margins of the Group of 20 summit to be held in Rome, Park said he has "cautious expectations" that the right international conditions will be created to advance the peace process on the peninsula.