Ban paid his respects at the funeral altar for Roh at Seoul National University Hospital in central Seoul earlier in the day. Roh, who served as president from 1988-93, died at age 88 on Tuesday.

"From a career diplomat's point of view, Roh is someone who exponentially broadened the horizon for South Korea's diplomacy," Ban told reporters after his visit to the funeral home. Ban served as the director of the foreign ministry's North America department while Roh was president.

Ban said that it was thanks to Roh's signature Nordpolitik, or Northern Policy, that Seoul forged formal diplomatic ties with more than 40 countries under his presidency, including nations in the communist East-European bloc as well as Cold War enemies, like China.

"It was a very tremendous diplomatic accomplishment," he extolled.

The ex-UN head also positively assessed a series of breakthrough inter-Korean agreements forged under Roh's presidency, including the Joint Declaration on the Denuclearization of the Korean Peninsula, signed between the two Koreas in 1991.

"They laid the major groundwork for issues pertaining to South and North Korea," Ban said, adding that he was among the five-member South Korean delegation in charge of negotiating the joint declaration with the North.

Ban also revealed that it was under Roh's presidency that Seoul and Washington made the first amendment to their Status of Forces Agreement (SOFA). The agreement forged in 1966 governs the legal status of the 28,500 American troops stationed on the southern part of the Korean Peninsula.

"Previously, we had no authority to indict American forces accused of violent crimes, such as murder, rape, drug-related crimes or arson, but through the 1991 revision, South Korea became capable of indicting and detaining offenders of nine key crimes until their local trials are completed," Ban noted, calling it an "important recovery of sovereign rights" by South Korea. 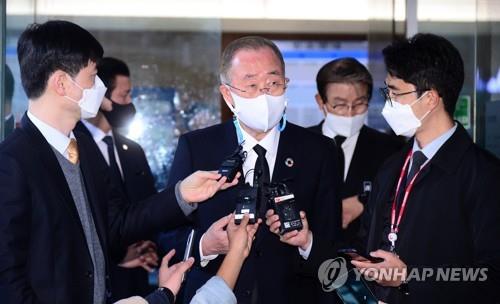