Lee earned 38.9 percent against 44.4 percent for Rep. Hong Joon-pyo of the main opposition People Power Party (PPP), according to the survey of 2,035 adults conducted Monday and Tuesday by Realmeter. 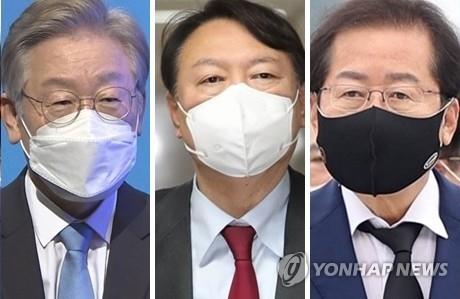 The difference with Hong was outside the margin of error of plus or minus 2.2 percentage points at the 95 percent confidence level. With Yoon, the difference was within the margin.

Lee also lost out to former Jeju Gov. Won Hee-ryong of the PPP in a hypothetical two-way race with 40.1 percent against Won's 43.8 percent.

The only PPP contender he led was former Rep. Yoo Seong-min with 40 percent against Yoo's 36.1 percent.

In a four-way race that included members of minor parties, Lee maintained a narrow lead over both Hong and Yoon.

Lee behind both Yoon, Hong in presidential race: poll

Lee behind both Yoon, Hong in presidential race: poll