SsangYong and the court-appointed lead manager EY Hanyoung accounting firm submitted an official document for the selection of the Edison consortium for the debt-laden carmaker last week and the court approved the preferred bidder early this week, a company official said over the phone.

SsangYong and EY Hanyoung will sign a memorandum of understanding with the Edison consortium for the deal on Monday, the official said.

The Edison consortium submitted the acquisition price of 310 billion won for SsangYong and has to pay 15.5 billion won, or 5 percent of it, to the carmaker on Monday, he said. 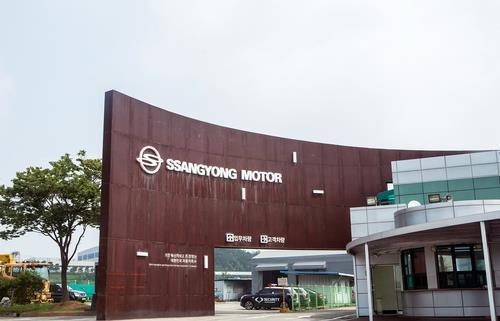 In the follow-up steps, the Edison consortium is scheduled to conduct a two-week due diligence on SsangYong next month and then sign a deal to acquire the SUV-focused carmaker.

It is estimated that up to 1 trillion won (US$850 million) is needed to take over SsangYong and then pay its debts.

Edison Motors has said it will set up a special purpose company to raise 800 billion won to 1 trillion won to acquire SsangYong and increase capital starting next year by issuing new shares to achieve a turnaround within three to five years.

In the January-August period, SsangYong's sales fell 17 percent to 61,854 vehicles from 74,707 units a year earlier. Its lineup consists of the Tivoli, Korando, Rexton and Rexton Sports SUVs.

The company also plans to sell its current Pyeongtaek plant, 70 kilometers south of Seoul, in three to five years and build a new factory in the same city to focus on electric vehicles.