The Catholic Archdiocese of Seoul said the decision was reached at noon Thursday in Rome, or 7 p.m. Thursday in Seoul. Chung, 60, was promoted to archbishop upon his appointment.

Chung will succeed Cardinal Andrew Yeom Soo-jung, 77, who is said to have expressed his desire to resign after reaching the mandatory retirement age of 75. 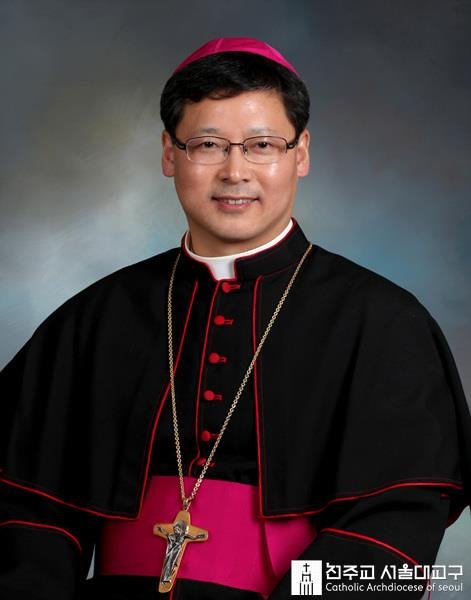 "Jesus is beyond the reach of humans. We can't possibly speculate on his planning or thinking," Chung said. "My mind is filled with apprehension. With the help of prayers, I will try to follow in the footsteps of great predecessors and cure souls the best I can."

A native of Daegu, some 300 kilometers southeast of Seoul, Chung studied chemical engineering at Seoul National University, and upon graduating in 1984, he enrolled at the Catholic University of Korea.

Two years later, Chung entered the Order of Discalced Carmelites. He was ordained to the priesthood in 1992 and earned a master's degree in sacred scriptures at the Pontifical Biblical Institute in Rome in 2004.

Chung later served as definitor general of the Order of Discalced Carmelites in Rome for the Far East and Oceania and then became auxiliary bishop for Seoul in 2013.

After being consecrated as bishop in 2014, Chung was president of the Committee for Youth Ministry of the Catholic Bishops' Conference of Korea.
(END)