Amb. Choi Tae-ho of South Korea attended the meeting between acting Afghan Foreign Minister Amir Khan Muttaqi, and ambassadors and representatives from Germany, Norway, the Netherlands, Japan and other countries in the Qatari capital Wednesday.

It was the first time South Korea has had a high-level meeting with the interim Afghan government since the Taliban's takeover in early August. 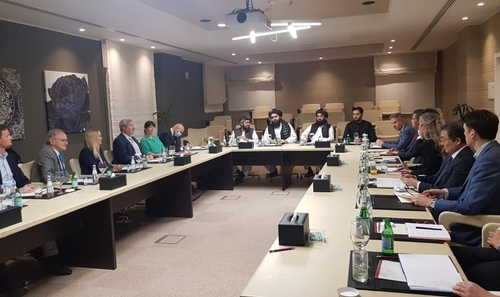 "The meeting lasted about one hour, but I understand they did not have in-depth talks," a South Korean diplomatic source said.

"The meeting was not of much significance, as the sides only confirmed their existing positions," the official said.

South Korean embassy officials evacuated from Kabul in August and are currently staying in Doha.

During the meeting, reportedly mediated by the Qatari government, the envoys urged the Taliban to abide by international rules, respect human rights, guarantee safe passage to Afghanistan and eradicate terrorism, the official said.

Muttaqi reportedly called for the formal recognition of the new Afghan government and economic support.
(END)