SEOUL, Oct. 29 (Yonhap) -- South Korea's veterans ministry said Friday it has named late Gen. Oliver Prince Smith of the U.S. Marine Corps as the Korean War hero of the month for his role in a major evacuation mission during the 1950-53 conflict.

Under his leadership, the 1st Marine Division of the U.S. fought their way against Chinese forces at the Battle of Chosin Reservoir, which is considered one of the fiercest battles of the war.

The 1950 battle enabled the famous Hungnam evacuation, in which U.N. troops helped evacuate a large number of Korean civilians.

The U.S. government conferred the Distinguished Service Cross on Smith in 1950 for his role in the battle. He retired as a four-star general in 1955. 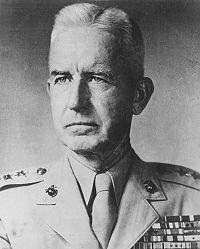