SEOUL, Oct. 29 (Yonhap) -- A teenager riding an e-scooter without a helmet has died after ramming into a utility pole while racing downhill in Seoul, police said Friday.

The 17-year-old high-school student crashed into the telephone pole at 8:26 p.m. Thursday on a road in Seoul's northern district of Nowon, police said.

After sustaining injuries to the head, he was given cardiopulmonary resuscitation and rushed to a nearby hospital but died, according to the police.

A police probe found he lost control of the personal mobility device on the downhill road and crashed.

He had a motorcycle driving license and was not under the influence of alcohol, and no helmet was found at the accident scene, the police said, adding they concluded the case to be an accident.

According to official data, the number of accidents involving e-scooters more than tripled between 2018 and 2020. The Seoul Metropolitan Fire and Disaster Headquarters responded to 366 e-scooter accidents over the three years: 57 in 2018, 117 in 2019 and 192 in 2020, the data showed. 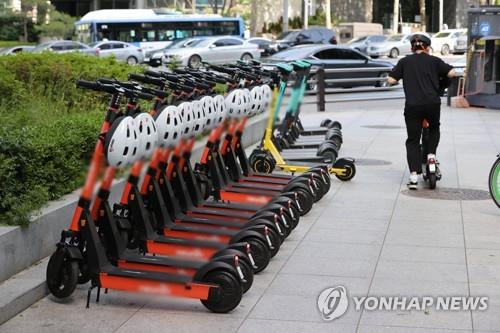