Noh Kyu-duk, special representative for Korean Peninsula peace and security affairs, and his American counterpart, Sung Kim, agreed on the need to "stably manage the situation" on the peninsula, the ministry said.

"They held constructive consultations over North Korean nuclear issues, including the end-of-war declaration," the ministry said in a statement.

"They will continue close consultations and cooperation for a quick resumption of the Korea peace process."

The phone talks followed their back-to-back in-person meetings in Seoul and Washington earlier this month, in which they discussed a proposed declaration formally ending the 1950-53 Korean War as a way to give much-needed momentum to the stalled dialogue with Pyongyang.

The talks came amid worries about possible disparity between the allies over the proposal. On Wednesday, White House National Security Advisor Jake Sullivan said Seoul and Washington may have "different perspectives on the precise sequence or timing or conditions for different steps" for the declaration.

In response, a senior Seoul government official said Thursday the two sides have been holding "fast-paced and serious" discussions in a "mutually desirable" direction and that diplomatic consultations can narrow their differences on details. 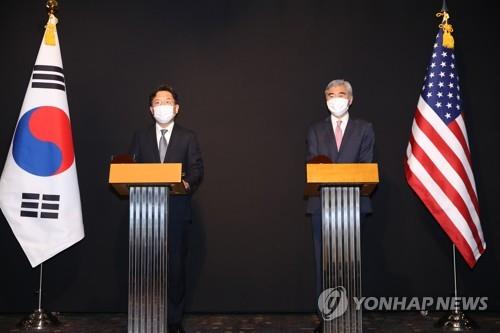