SEOUL, Oct. 31 (Yonhap) -- Lee Jae-myung, the presidential nominee of the ruling Democratic Party, has said that, if elected, he will launch a real estate supervisory service in an effort to root out corruption in the property market.

Lee made the remark during an interview with Yonhap News Agency on Friday, saying he would give the service powers to conduct investigations into any irregularities that arise in the real estate market.

The pledge comes as Lee has been accused of involvement in a massive corruption scandal surrounding an apartment development project undertaken in Seongnam, south of Seoul, in 2015 when he was the city's mayor.

"We have to create a real estate supervisory service with actual powers to wield investigative authority and investigate every day," Lee told Yonhap at a hotel in Seongnam.

"We have to make it so that people can't make money through unfair means," he said, adding that those who do should be denied the right to carry out real estate transactions. 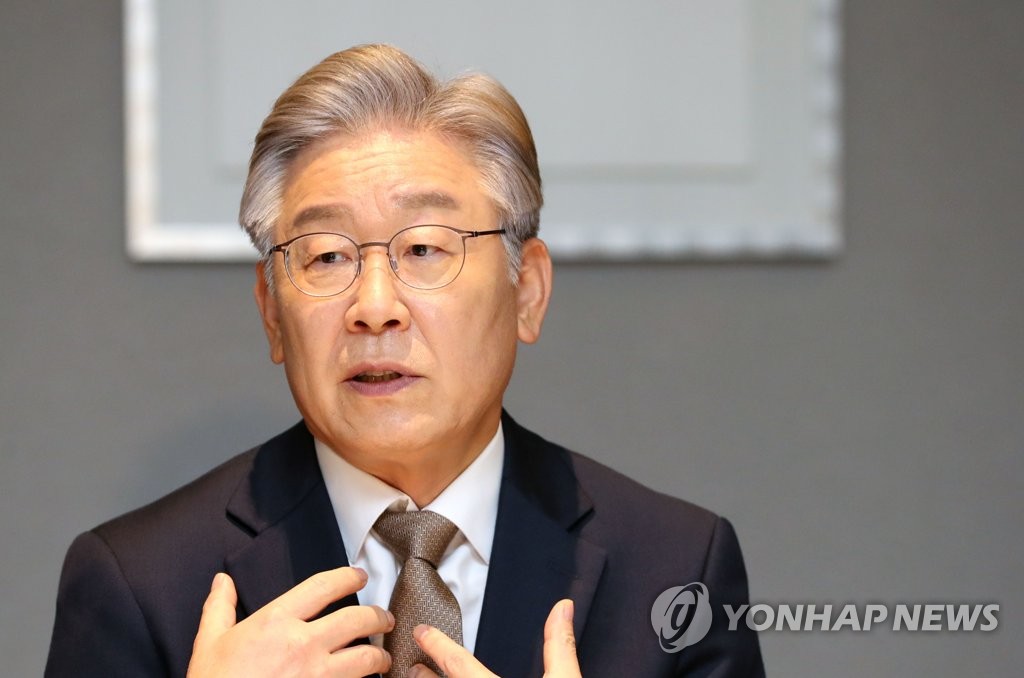 Lee described real estate issues as "the most serious problem" facing the country. If the envisioned supervisory service is launched, he said it will look into irregularities, such as speculative purchases of farmland, and force the sales of plots that are not being used for farming.

"If we institutionalize such measures, we can easily bring the real estate issue under control," he said.

"It's because there is such high public discontent over real estate issues that so many people are voicing their grievances over Daejang-dong," he added, referring to the district in Seongnam where the apartment complex at the center of the corruption scandal was built.

The scandal centers on allegations that Seongnam Development Corp., a city-run entity, helped a little known asset management firm reap 1,000 times its investment in profits from the public-private partnership project.

Yoo Dong-gyu, former acting president of Seongnam Development Corp., has been arrested on charges of breach of trust and bribe-taking. He is considered a close aide to Lee, although the nominee has denied it.

"I acknowledge that public anger has reached me and for that I have to take political and moral responsibility," he said, claiming it was his fault that there were some "polluted people" under his command.

"Yoo Dong-gyu apparently said when he took the money (bribes) that there would be big trouble if the 2nd floor found out," Lee said, referring to his former office at Seongnam City Hall.

"That's why Yoo Dong-gyu kept it hidden, and if I had known that he was in contact I would have fired him," he said.

The presidential election is slated for March 9.