SEOUL, Nov. 1 (Yonhap) -- The main opposition People Power Party (PPP) kicked off the final week of its presidential primary Monday as the two front-runners appeared to be locked in a tight race for the nomination.

The party's standard-bearer is scheduled to be determined and announced at a national convention Friday after four days of polling party members and the general public on their most favored candidate. 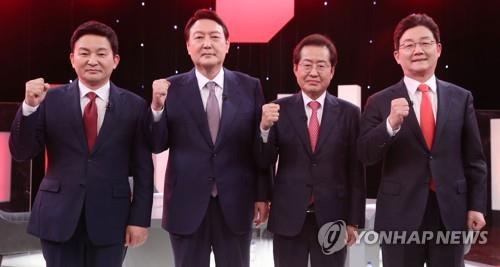 The candidate who wins the most votes after combining the ballots of party members and the general public by a 50:50 ratio will take home the nomination. Friday's event will mark the end of the third and final round of the primary and there will be no run-off.

"To ensure the Republic of Korea doesn't leave you out as it prepares for the future, I ask all party members to take part in the mobile vote starting at 9 a.m. tomorrow," PPP Chairman Lee Jun-seok wrote on Facebook on Sunday. "If the turnout exceeds 70 percent, I will quit carbs for a month."

With one hour left until the closing of polls at 5 p.m. Monday, around 43 percent of party members had cast their ballots, nearing the record 49.94 percent set during the second round of the primary, according to the party.

Political watchers say a key deciding factor in the outcome will be the votes of new and young party members who joined the PPP after Lee, 36, was chosen as the chairman in the first national convention in June.

The number of members with voting rights has more than doubled from 280,000 to 570,000 since then, and around half of the new members are voters in their 20s to 40s, who are expected to support Hong, whereas most of the conservative party's mainstream members in their 50s or older are projected to pick Yoon. 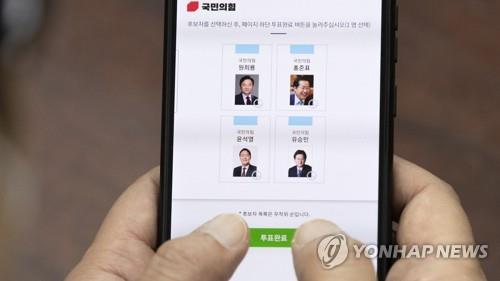 Yoon and Hong, the front-runners in the race, have each claimed they will emerge as the winner because opinion surveys have shown Yoon to be more popular among party members and Hong to be leading among the general public.

In a survey by the Korea Society Opinion Institute, which asked respondents to pick the most competitive PPP candidate for the March 9 presidential election, Hong beat Yoon 38.6 percent to 34 percent, followed by Yoo with 11.4 percent and Won with 3.5 percent.

The survey was conducted Friday and Saturday on 1,016 adults nationwide and had a margin of error of plus or minus 3.1 percentage points at the 95 percent confidence level.