SEOUL, Nov. 2 (Yonhap) -- Russia wants to work with the two Koreas to reboot a cross-border logistics project in its Far East to promote trade and economic cooperation once pandemic-era border restrictions are lifted and inter-Korean relations improve, a senior Russian official said.

Alexei Chekunkov, minister for the development of the Russian Far East and Arctic, called for consultations at various levels to renew the push for a proposed rail and port network linking North Korea's northeastern city of Rajin with the eastern Russian border town of Khasan.

The project was first proposed nearly a decade ago to transport Russia's rich mineral resources to South Korea via the Rajin port, but its fate remains uncertain due to the drawn-out absence of dialogue with Pyongyang following its 2016 nuclear test and pandemic-driven border closures.

Chekunkov said the trilateral cooperation can benefit all the parties by facilitating cooperation in the infrastructure and trade sectors and expressed hope that it will pick up pace once the COVID-19 pandemic subsides.

"In logistics, everything is extremely simple. It's physics. If you have a shorter route, it makes sense to use it," Chekunkov said Monday during an interview with Yonhap News Agency in Seoul. "I look forward to resuming work on that project and I believe that the key parties to this project will be able to overcome any difficulties that exist." 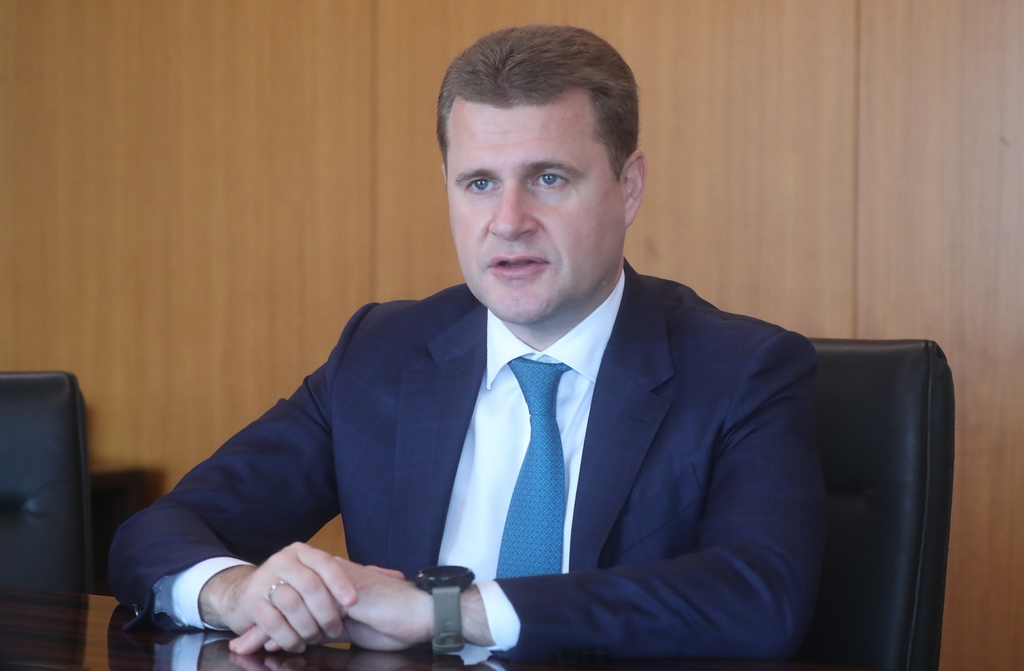 He said Russia is also keen on expanding collaborations with Korean companies in developing the Northern Sea Route as part of its move to offer "one more corridor" for global trade.

Moscow has promoted the Northern Sea Route as an alternative to the Suez Canal that cuts shipping days from Asia to Europe, and stepped up developing powerful icebreakers capable of navigating the Arctic Sea's thick ice, its biggest hurdle.

"I see a great synergy and great combination of interests of Russia as the country (South Korea) has all the ports, infrastructure, and most important ice breakers fleet," he said. "I think this cooperation is really of mutual interest and already have good and successful track record of cooperating with Korean shipyards."

The Russian official praised Korean shipbuilders' advanced technology especially in building the special grade ice breaking ships and liquefied natural gas (LNG) carriers, wishing them "good luck" for their bids to win upcoming icebreaking projects. He did not go into details, with relevant negotiations under way.

"We very much look forward to jointly building this ice-class fleet and jointly setting up regular container routes going from East Asia to Europe in order to make Northern Sea Route a mainstream maritime transport corridor," he said.

Another promising area for bilateral industrial cooperation is hydrogen, which has emerged as a clean alternative to fossil fuels amid the global race to cut greenhouse gas emissions, he added.

Chekunkov said that hydrogen is a "capricious" energy that needs advanced technology to handle but pointed out that the two countries can team up to develop the industry for "mutually beneficial results" to get closer to their carbon neutrality goals. South Korea aims to go carbon neutral by 2050, and Russia is campaigning to achieve the goal by 2060.

"The Russian government is committed to building hydrogen economy," he said. "Korea, specifically, is the soft spot where we would like to combine with our strategic buyers and technology providers to jointly develop hydrogen projects and make the economy cleaner and more efficient."