SEOUL, Nov. 2 (Yonhap) -- South Korea's minister in charge of inter-Korean relations held a series of meetings with heads of international organizations in Geneva this week to discuss North Korea issues, his office said Tuesday, amid brisk talks between Seoul and Washington on providing humanitarian assistance to the reclusive state.

"(The two sides) exchanged opinions on North Korea's COVID-19 situation and ways to cooperate in its public health and medical sectors," the ministry said in a press release.

The meeting took place after the minister accompanied President Moon Jae-in on his latest Vatican visit.

On the same day, Lee also met with the International Federation of Red Cross and Red Crescent Societies (IFRC) Secretary General Jagan Chapagain and the International Committee of the Red Cross (ICRC) Vice President Gilles Carbonnier and agreed to continue close communications to push for the reunions of families separated by the 1950-53 Korean War and on other humanitarian issues involving North Korea. 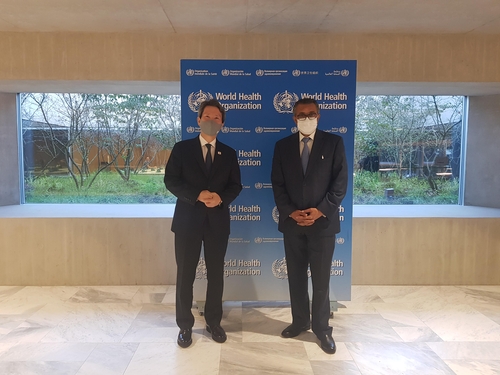 Lee was set to wrap up his Europe visit and return home Wednesday.

The series of meetings came as senior officials from South Korea and the United States gathered in Washington on Monday to discuss ways to restart dialogue with North Korea.

Seoul's foreign ministry said the two sides had working-level talks to implement various trust-building measures to bring Pyongyang back to the negotiating table.

The ministry did not provide further details, but Seoul and Washington are known to be at the last stage of coordinating humanitarian assistance to North Korea, such as quarantine supplies.

"South Korea and the U.S. had close communications, and reached a great deal of shared understanding and progress," a ministry official told reporters on background. "But it is hard to tell exactly when the assistance could be made as it's a matter related to various factors and external circumstances."

The North has remained unresponsive to U.S. overtures for talks after their Hanoi summit in February 2019 collapsed without a deal.

On Tuesday, the Korea NGO Council for Cooperation with North Korea sent a letter to U.S. Secretary of State Antony Blinken, calling for coronavirus vaccine assistance to North Korea.

"The most important thing at present to improve the humanitarian situation in North Korea is to help with the response to COVID-19," the group stressed in the letter.