K-Bank, controlled by a consortium of telecom giant KT Corp., Woori Bank and 19 other companies, saw its third-quarter earnings more than double from three months earlier.

Net profit came to 16.8 billion won (US$14.3 million) in the July-September period, up from 3.9 billion won in the second quarter, K-Bank said in a regulatory filing.

In the first nine months of the year, K-Bank chalked up a cumulative net income of 8.4 billion won, putting the lender on course for its first yearly profit for 2021. 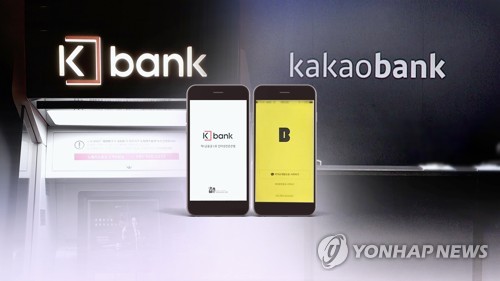 Later in the day, Kakao Bank, affiliated with Kakao Corp., the operator of the country's dominant messaging app KakaoTalk, announced that its net profit in the third quarter increased 28 percent year-on-year to 52 billion won.

Its cumulative net income in the three quarters of the year stood at a record-high 167.9 billion won, up 95 percent from a year ago, the company said in a regulatory filing.

The two online banks' robust results were attributed to a jump in the number of customers and the amount of loan deposits.

The number of K-Bank's customers came to 6.6 million as of end-September, up from 2.19 million at the end of last year.

The number of Kakao Bank's customers stood at 17.4 million as of end-September, up from 15.44 million at the end of last year.

In 2017, South Korea permitted the two internet-only banks to offer services around the clock in an effort to inject more competition into the banking sector. Third online lender Toss Bank began operations in early October.
(END)