Frank Rijsberman, the director-general of the Global Green Growth Institute (GGGI), welcomed the growing awareness of global warming before it's too late, as over 100 world leaders vowed to fight climate change during 26th UN Climate Change Conference (COP26) held in Glasgow earlier this week.

At the crucial summit, President Moon Jae-in declared South Korea's commitment to cut greenhouse gas emissions by 40 percent from 2018 levels by 2030 as part of efforts to achieve carbon neutrality by 2050.

"Since the pandemic, he (Moon) has exercised a bit of leadership and made some important decisions in this area," Rijsberman said during a recent interview with Yonhap News Agency at the GGGI headquarters in Seoul. "In the end, that might be more of his legacy."

Rijsberman said he was happy to see Moon's pledges to expand overseas development assistance (ODA) and fund for green energy projects at the COP26 summit, vowing to closely work with the Korean government to help developing nations' efforts to tackle climate change and pursue green growth.

"We can share the experience of how to develop the Green New Deal with other countries," he said. "It's small, but it's quite significant." 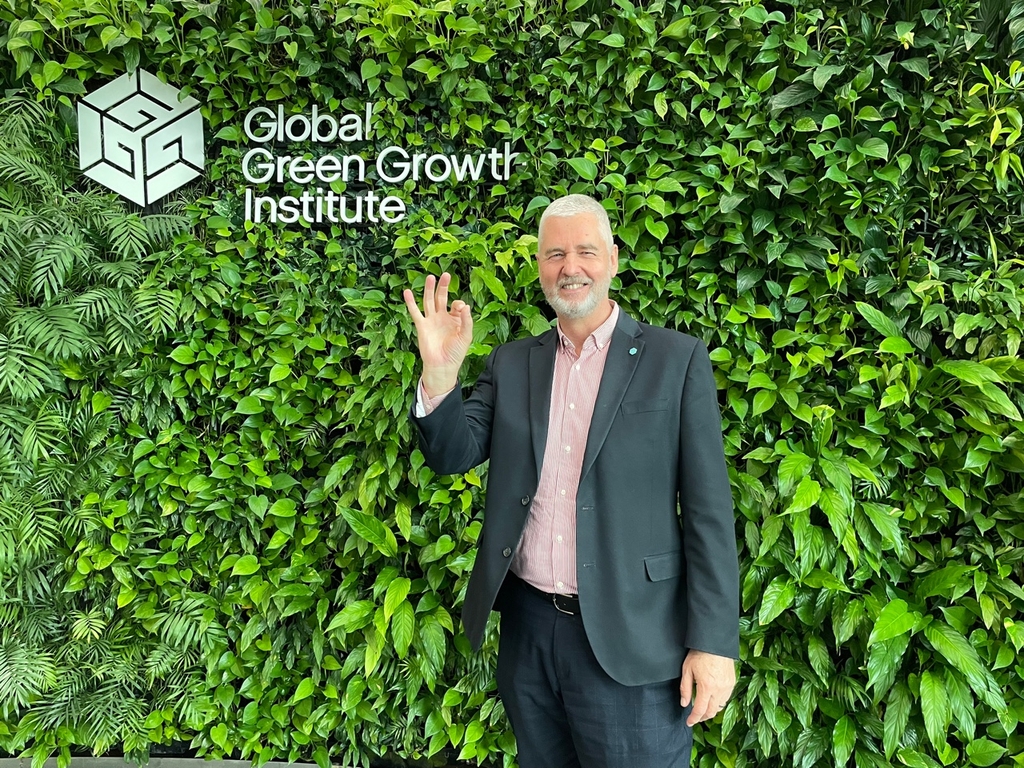 The Dutch-born chief acknowledged challenges for the carbon neutrality goal. Nonetheless, he called for bolder, faster actions on the coal power generation to tackle the worsening air pollution, which has become a serious problem for Asia's fourth-largest economy.

Rijsberman said he wants to see a complete coal phase-out much sooner than the target year, as well as exiting from the ongoing construction projects abroad.

"We should be talking about stopping construction and closing the coal-fired power plants," he emphasized. "All of them will have to be closed."

He was apparently referring to the state-run Korea Power Electric Corp., which has decided to build new coal plants in Vietnam and Indonesia despite opposition from environmental groups and global investors, though it vowed to stop new projects.

South Korea is the world's fourth-largest coal importer, and some 60 coal-fired power plants produced about 40 percent of the country's electricity last year, with construction of new plants still underway. The country aims to phase out coal plants by 2050.

Rijsberman said the complete exit from thermal coal makes economic sense, because traditional fossil fuel is not cheap any more, considering its environmental costs and the expenses needed to offset carbon emissions. He pointed out the "vested interests" in "brown industries," such as heavy manufacturing industries, as the biggest challenge for the green transition.

"So far, people are not willing to accept the sacrifices that need to be made to deal with a climate crisis," he said. "That I think is the most important thing."

In shifts, he said the government and companies should expand investment in clean industries, including renewables, electric vehicles, batteries and hydrogen, to capture a bigger share of the emerging energy sectors.

"There are green opportunities that should replace those brown investments," the former director for the Bill and Melinda Gates Foundation said.

Among the industries, Rijsberman saw hydrogen as a potential game changer over the next decade, as eco-friendly technologies are advancing to produce hydrogen without greenhouse gas emissions in the whole process.

Another tool South Korea can use to achieve its reduction pledge is a carbon emission trading scheme, in which companies can buy extra emissions rights when they surpass their own quota.

For example, local companies' projects to preserve forests in Southeast Asian countries can earn carbon credits, which could later be used to compensate for carbon emissions made elsewhere.

The director-general said the GGGI has been closely working with a number of developing nations to prepare the cap-and-trade trading scheme to offer the option to buy and sell excess carbon with other countries, which was also discussed at the COP26.

"It (South Korea) will need to work with other countries to buy carbon credits in other countries," he said. "We're in this together. GGGI is working on all these things with our member partners."