SEOUL, Nov. 3 (Yonhap) -- South Korea and a group of Arab countries have agreed to push for the resumption of their free trade talks that have been suspended for a decade in a move to forge deeper economic ties, Seoul's industry ministry said Wednesday.

The announcement was made during the meeting between South Korea's Trade Minister Yeo Han-koo and the Gulf Cooperation Council (GCC)'s Secretary General Nayef Falah M. Al-Hajraf held in Riyadh earlier in the day, according to the Ministry of Trade, Industry and Energy.

South Korea and the GCC agreed to push for a free trade agreement (FTA) in 2007 and had three rounds of talks between 2008 and 2009. But the negotiations have since stalled after the council announced the suspension in 2010.

"The Gulf region is a crucial market for South Korea given its population, income and growth potential. The agreement for the resumption of FTA talks is expected to serve as a chance to boost trade, investment and overall cooperation with the six nations," the ministry said in a release.

The trade minister is in Saudi Arabia for a five-day overseas trip, which will later take him to Britain, his office said. 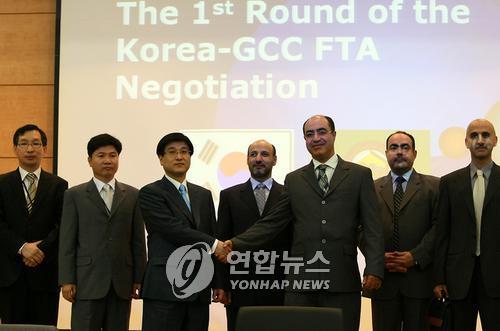