SEOUL, Nov. 3 (Yonhap) --- Boisterous shouting matches plagued the site in central Seoul of a girl's statue symbolizing victims of Japan's wartime sexual slavery Wednesday as supporters and detractors of the victims resumed rallies for the first time since distancing rules were eased.

Before rallies were banned under COVID-19 rules last year, the site near Japan's Embassy had become a battleground every Wednesday, as supporters of the sexual slavery victims held a weekly "Wednesday rally" demanding an apology from Japan and conservative detractors held an opposing the protests.

After more than a year of hiatus, rallies resumed between the two sides at the statue site Wednesday, as eased social distancing rules went into force this week in line with the government's "living with COVID-19" scheme.

Early Wednesday morning, about 10 anti-Japanese activists turned up at the site, holding banners calling for the resolution of the sexual slavery issue and shouting through loudspeakers that they won't leave until all "pro-Japanese" forces are gone from the site.

Members of the People's Solidarity for Liberty, a conservative organization, later held an opposing rally near the site, claiming through loudspeakers mounted atop vehicles the anti-Japanese activists unfairly occupied their protest site.

About 240 riot police were deployed to ensure the two sides won't clash.

It became noisier when dozens of supporters of the sexual slavery victims held a "Wednesday rally" for the first time in one year and four months as members of the conservative group tried to interrupt the rally by loudly playing songs and hurling curses through the speakers.

"Look at what's happening here now. They're hurting the bruised hearts of the victims with heinous slogans and unspeakable words," said Lee Na-young, leader of the Korean Council for Justice and Remembrance for the Issues of Military Sexual Slavery by Japan.

"This is the reason why the spirit of Wednesday rally must live on," she said. 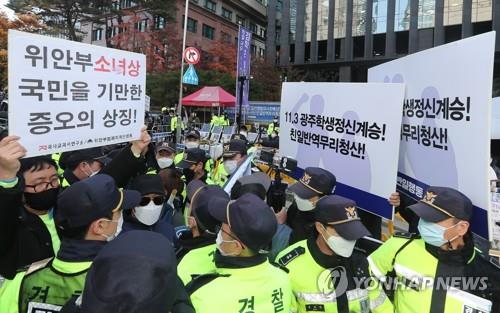