BUDAPEST, Nov. 3 (Yonhap) -- President Moon Jae-in held a summit with Hungarian President Janos Ader on Wednesday and agreed to upgrade relations between the two countries to a strategic partnership as two-way trade grew at a solid pace despite the COVID-19 pandemic.

"In spite of the COVID-19 pandemic, bilateral trade reached a new high last year," Moon said during a joint press briefing after the talks, adding that he hopes the two nations will step up cooperation in electric cars and batteries.

The two sides also agreed to expand forward-looking cooperation in the fields of economy, science, technology and culture, and had in-depth discussions on a wide range of topics to strengthen friendly and cooperative relations between the two nations, Moon's office said.

The summit came a day after Moon arrived in Budapest for a state visit, becoming the first South Korean president to visit the country in 20 years. The state visit also includes talks with Prime Minister Viktor Orban set for later in the day.

Bilateral trade between South Korea and Hungary stood at US$3.6 billion in 2020, compared with $2.97 billion a year ago, according to Korean government data. 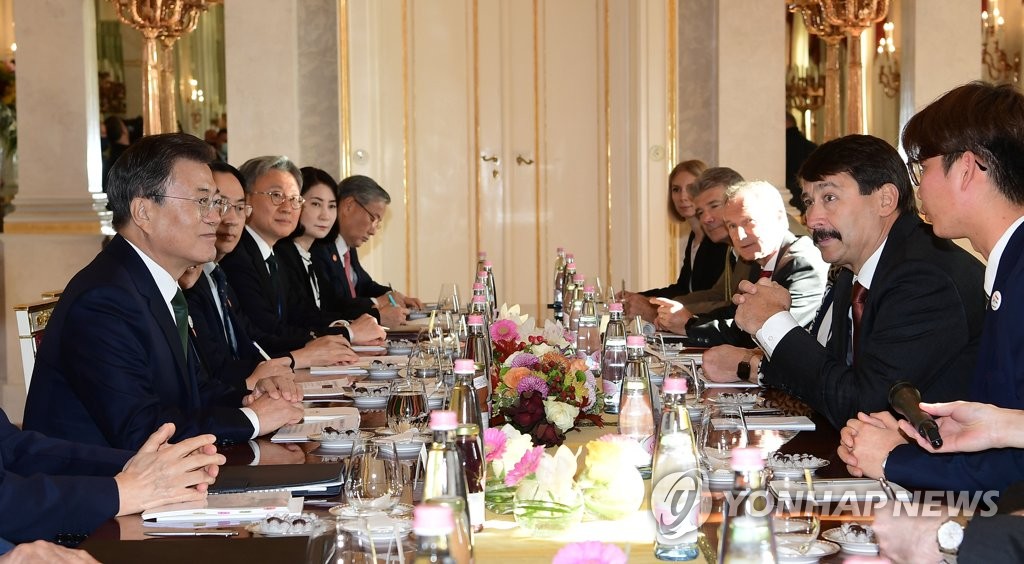 During the summit, South Korea and Hungary also agreed to make joint efforts to cope with global crises, such as the pandemic and climate change, according to Moon's office.

Ader said Hungary will continue to support Seoul's efforts to foster peace on the Korean Peninsula.

Hungary is one of South Korea's key partners in Europe serving as a bridgehead for Korean businesses to advance into European markets. Currently, some 90 Korean companies, including Samsung Electronics and Hankook Tire, are investing in Hungary.

Later in the day, Moon will hold a bilateral meeting with Hungarian Prime Minister Viktor Orban.

Also scheduled are meetings with business leaders from Hungary, Poland, the Czech Republic and Slovakia, which form the Visegrad Group.