SEOUL, Nov. 3 (Yonhap) -- North Korea's ambassador to the United Nations (UN) has called for the dismantlement of the U.S.-led United Nations Command (UNC) on the Korean Peninsula, claiming it is only serving the political and military interests of Washington.

Amb. Kim Song made the remarks at the fourth committee meeting of the 76th Session of the U.N. General Assembly in New York on Oct. 27, accusing the U.S. of using the command for the "occupation" of South Korea and exerting influence in the region.

"My delegation holds that immediate measures should be taken to dismantle the UNC in South Korea, which abuses the name of the United Nations," he said.

Established in 1950 under a U.N. mandate in response to North Korea's military provocations, the UNC has played a role as the enforcer of the armistice agreement that halted the 1950-53 Korean War.

The ambassador's remarks came as Pyongyang remains unresponsive to Washington's overtures for dialogue, demanding the U.S. first retract what it calls "hostile policy" against the North.

The denuclearization negotiations have been stalled since the Hanoi summit between the U.S. and North Korea failed to produce a deal in February 2019.

During last week's meeting, the North Korean envoy also criticized Israel for what he called a crime against humanity on Palestinians. The attending Israeli representative lashed back, saying Kim should focus on his own country that "blocks the provision of aid to its own suffering people." 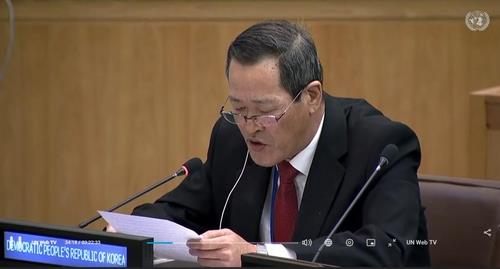