SEOUL, Nov. 4 (Yonhap) -- A Seoul court on Thursday issued an arrest warrant for the owner of an asset management firm at the center of an urban development corruption scandal over allegations his firm received business favors in exchange for bribes.

Kim Man-bae, owner of Hwacheon Daeyu Asset Management, is facing charges of breach of trust and bribery in connection with a 2015 project to develop the Daejang-dong district in Seongnam, south of Seoul, into apartment complexes.

Prosecutors have been looking into suspicions over how the previously unheard-of asset management company and its seven affiliates were chosen as private partners for the lucrative project and reaped astronomical profits.

The Seoul Central District Court decided Thursday to issue an arrest warrant for Kim after holding a hearing Wednesday. The court ruled that Kim posed a flight risk and could destroy evidence.

Prosecutors believe Kim colluded with Yoo Dong-gyu, former acting president of Seongnam Development Corp., in manipulating the public bidding procedure in favor of Hwacheon Daeyu to eventually have it picked as the private partner and allow it to reap profits of 65.1 billion won (US$55.1 million).

Kim has denied all charges against him, claiming that his firm joined the project in accordance with relevant policies set by Seongnam City. 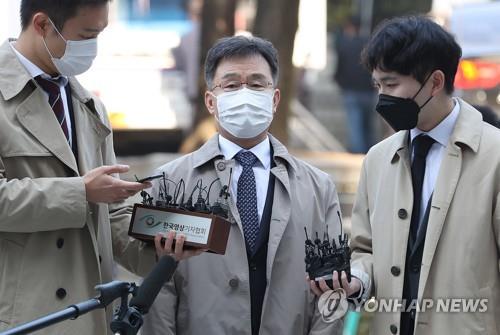 The scandal has received intense media coverage amid questions about its potential impact on next year's presidential election, as the project was launched when the ruling Democratic Party's presidential nominee, Gyeonggi Gov. Lee Jae-myung, was mayor of Seongnam.

Lee has apologized for what he described as "appointing the wrong people" but has rejected all allegations raised against him.