WASHINGTON, Nov. 3 (Yonhap) -- An accidental conflict with North Korea is unlikely anytime soon with Pyongyang maintaining a very tight grip on its military, the chairman of U.S. Joint Chiefs of Staff said Wednesday.

Gen. Mark Milley also dismissed the possibility of something accidental taking place within the North or its military in the near future.

"I would say that the government of North Korea at this point in time appears to be stable and they have good control over their military and their systems and all of their weaponry, etc," the top U.S. military officer said in a forum hosted by the Aspen Institute think tank in Washington.

"So I don't think you would see something accidental happen from them. It could, but I don't think that's highly probable. They have very, very tight control over their system," he added when asked about the level of control North Korea has over its weapons and internal security. 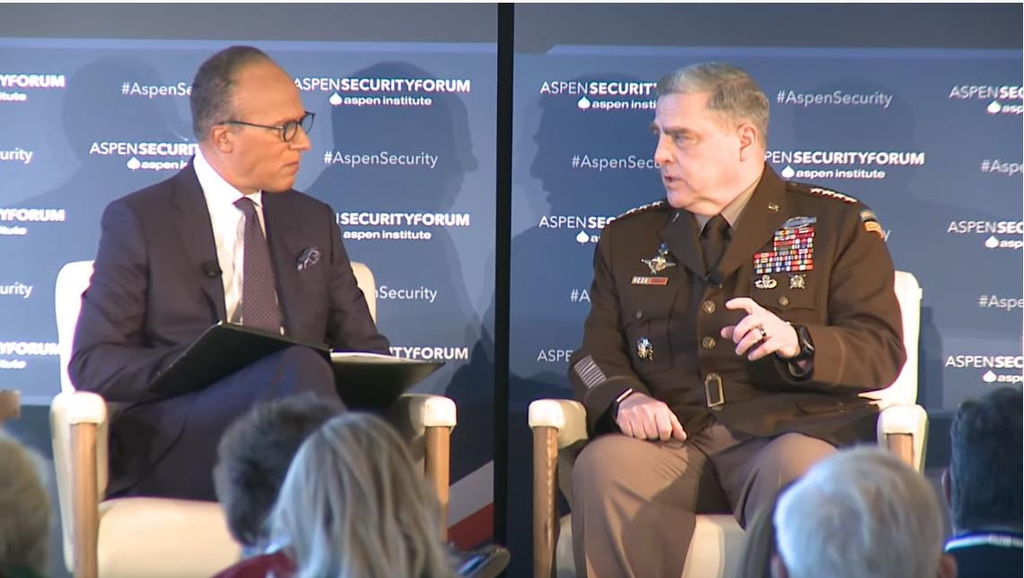 Milley noted bad things could happen quickly on the Korean Peninsula with 70 percent of the North Korean military deployed "within miles" of the inter-Korean border, called the Demilitarized Zone (DMZ).

"The peninsula is one of those areas that is highly militarized. Seventy percent of the North Korean military is within miles of the DMZ, within miles of Seoul. So bad things could happen on the Korean peninsula on relatively short notice," he said.

"So we always maintain a very, very high state of readiness with respect to the Korean peninsula."

His remarks come after a recent series of missile tests by North Korea that many have pointed to as an indication of the North's continued to efforts to build up its nuclear and missile capabilities.

Its missile tests are widely viewed as an attempt to develop and advance its delivery system, potentially to reach the U.S. mainland.

Milley said the North's true intentions may be hard to figure out but that the U.S. and South Korea remain ready to counter any aggression from the North at any time.

"North Korea is one of the hardest countries on the earth to figure out intentions for a lot of reasons, mostly because it's a very, very closed totalitarian society," Milley said.