SEOUL, Nov. 5 (Yonhap) -- Yoon Seok-youl is a former prosecutor who was best known for standing up to power before a series of high-profile clashes with the Moon Jae-in administration launched him into politics and landed him the presidential nomination of the main opposition People Power Party (PPP) on Friday.

The 60-year-old is a newcomer to the conservative party and has little to show for political experience or alignment with the party's core tenets and values.

If anything, the former prosecutor general has been accused of playing a key role in undermining the legitimacy of the previous conservative government of President Park Geun-hye and exposing its corruption, leading to her impeachment and imprisonment. 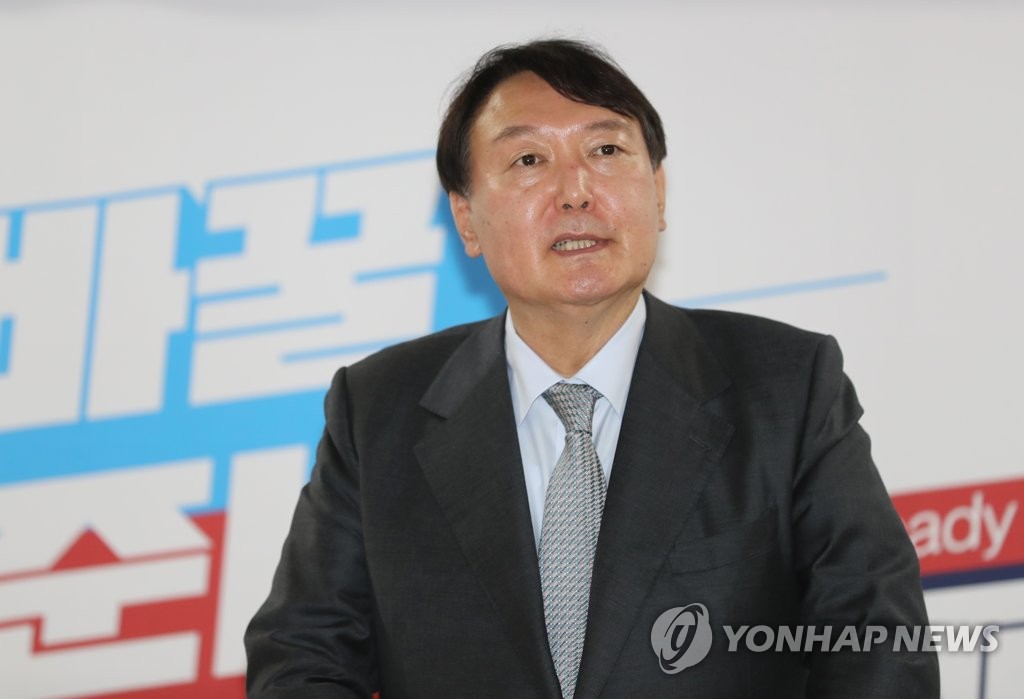 In 2013, Yoon conducted an investigation into sensational allegations that the country's main spy agency, the National Intelligence Service, had some of its employees post comments online ahead of the December 2012 presidential election in an attempt to sway public opinion in favor of then ruling party candidate Park.

The probe raised the ire of the Park administration. Later in 2013, Yoon made the bombshell revelation that he received undue pressure from outside during the course of the investigation. The investigation ultimately led to Yoon's demotion.

He famously said at the time: "I do not show allegiance to people."

Despite the setback, Yoon made a comeback in 2016 as a lead prosecutor investigating a massive corruption scandal implicating then President Park. 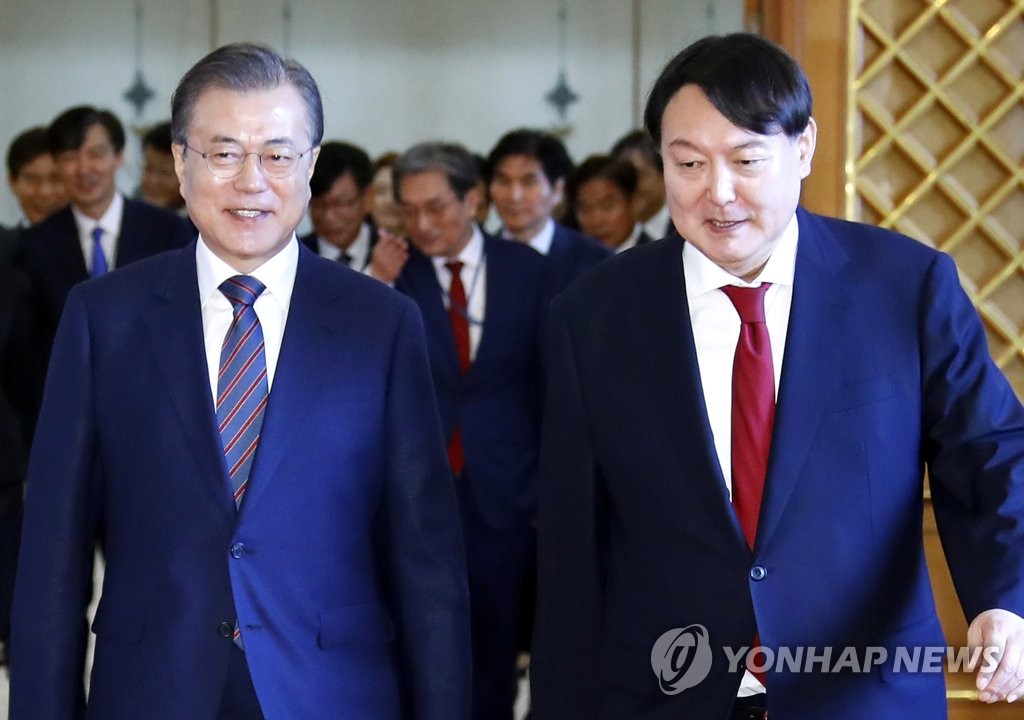 Park was impeached amid the probe, and the conservatives lost the next presidential election in May 2017 to now President Moon Jae-in, a liberal beacon.

Yoon's career took off under Moon, first as chief of the Seoul Central District Prosecutors Office and then as prosecutor general in July 2019.

Moon's request to Yoon was that he be "strict to living powers also."

But the two men's amicable relationship took a downturn when the prosecution under Yoon launched a corruption investigation into Cho Kuk, Moon's close aide and pick for justice minister.

The most damning of the allegations against Cho was that his wife had forged and obtained false certificates to help their daughter gain admission to a medical school.

In one of the defining moments of Moon's presidency, tens of thousands of people took to the streets in protest or support of Cho. 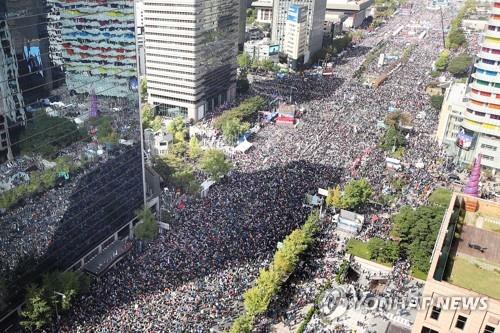 Cho resigned shortly after his appointment, dealing a serious blow to the standing of Moon and his administration. By the same token, Yoon emerged as a darling of the conservative bloc.

Tensions between Yoon and the Moon administration escalated further with the appointment of Cho's successor Choo Mi-ae, who aggressively pushed the president's agenda for prosecution reform.

Yoon opposed the president's plans to weaken the prosecution's investigative powers, and his defiance of Choo's orders set him up for the justice ministry's unprecedented decision in December 2020 to suspend the prosecutor general from duty for two months.

Yoon was reinstated days later through a court injunction, but he ultimately resigned in March with four months left of his two-year tenure.

"I will achieve a change of government without fail and end the politics of division and anger, corruption and plunder," Yoon said in his acceptance speech after winning the nomination Friday.

"This administration is probably very afraid and sick to the bone about my victory in the primary," he continued. "That's because I am the symbol of fairness who toppled Cho Kuk's hypocrisy and Choo Mi-ae's arrogance, as well as the fatal pain that destroys the legitimacy of the Moon Jae-in administration." 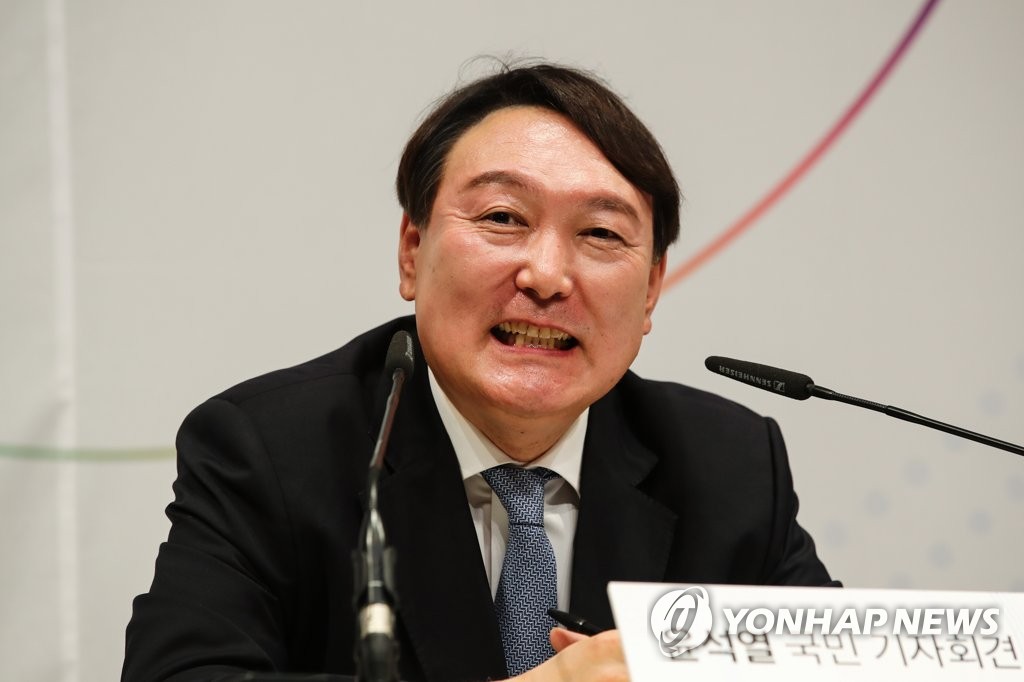 The "Choo-Yoon feud" solidified Yoon's standing as a potential presidential candidate on the conservative ticket, and the absence of a credible alternative landed him atop opinion polls asking the public to pick the next leader.

Yoon entered a period of soul-searching and resurfaced in June to announce his presidential bid, becoming the first person to transition directly from chief prosecutor to a leading presidential candidate.

He said the decision was a response to the public's yearning for a change of government. Moreover, he lambasted the Moon administration for fomenting division and destroying the country's foundation by abandoning common sense, fairness and the rule of law.

In July, Yoon joined the PPP. 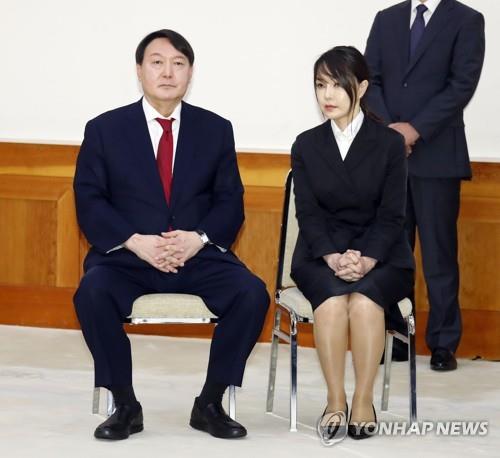 Yoon's campaign pledges, especially those on foreign policy, are in line with conservative views, some of them far-right, including a promise to ask the United States to redeploy tactical nuclear weapons or agree to a nuclear-sharing deal if South Korea's security is threatened by North Korea's nuclear and missile programs.

On relations with China, Yoon said he would continue dialogue on the basis of mutual respect, peace and prosperity, common interests and a separation of politics and business. With Japan, he promised to seek a comprehensive solution to disputes over history and trade by activating high-level and summit diplomacy.

Yoon's No. 1 campaign pledge in policy focused on real estate issues, a key weakness of the Moon administration. Yoon said his aim is to improve the living conditions of all citizens by first supplying 300,000 units of housing for young people within five years.

Outside of policy issues, he was prone to making gaffes and careless remarks, such as when he displayed the Chinese character for "king" on his palm or claimed many praised the political leadership of former dictator Chun Doo-hwan, except for his staging of a military coup and bloody crackdown on democracy activists.

Moreover, Yoon faced accusations of past political meddling while his wife and mother-in-law ran into legal trouble over suspicions of stock manipulation and fraud.

Yoon studied law at Seoul National University and passed the bar in 1991 on his ninth try. He was born in Seoul to parents who taught at universities.