SEOUL, Nov. 4 (Yonhap) -- The vice president of Netflix Inc. said Thursday the global streaming giant is well aware of controversies surrounding costs from increased network traffic due to a surge of viewers in South Korea.

The U.S.-based streamer has been under criticism by local internet service providers (ISPs) and regulators for refusing to pay for the use of the network. President Moon Jae-in earlier also said global platforms and content providers should meet their responsibilities. 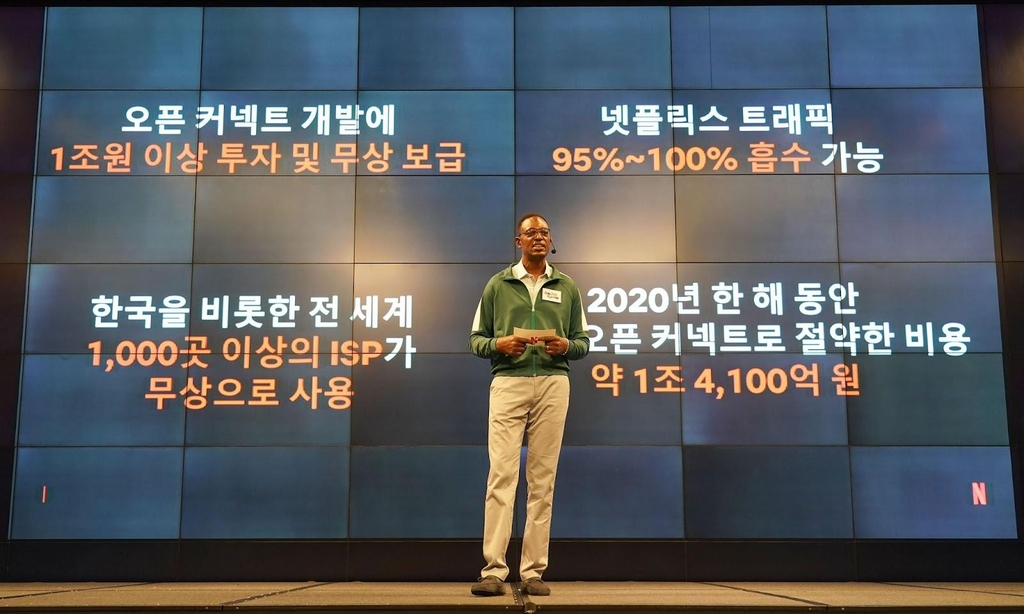 "We fully agree with what President Moon said," Dean Garfield, vice president of global public policy at Netflix, said during a press conference in Seoul, adding that Netflix wants to contribute to the overall entertainment and storytelling ecosystem here.

Garfield said Netflix has "invested more than 1 trillion won to build and provide a content delivery network, called Open Connect, to store our content as close to members as possible."

Open Connect, developed 10 years ago, has proven to help reduce network traffic by at least 95 percent, and has helped ISPs globally save more than US$1.2 billion in 2020 alone, according to Netflix.

Local ISPs like SK Broadband Co., however, have accused Netflix of free-riding on their networks despite huge traffic overload caused by Netflix's streaming service, whose number of subscribers in South Korea is estimated to have increased to about 4 million.

In June, the global streamer lost a lawsuit against SK Broadband. A local court ruled against Netflix, saying it is "reasonable" for Netflix to provide something in return for the service.

SK Broadband, an affiliate of the nation's top mobile carrier, SK Telecom Co., also argues that Netflix pays what appears to be network usage fees to telecom companies in the U.S. and France, but not in South Korea, where domestic platform service providers, like Naver and Kakao, pay fees.

The vice president, however, refuted such claims, saying that Netflix treats its over 1,000 ISP partners across the world equally.

Garfield also said that Netflix will continue to invest in Korean content as there are more local players than any other in the world.