BUDAPEST, Nov. 4 (Yonhap) -- President Moon Jae-in made a fresh pitch for a papal visit to North Korea and showed the world South Korea's carbon neutrality and COVID-19 vaccine plans during his just-ended, three-nation swing through Europe.

Before kicking off a diplomatic marathon at a summit of the Group of 20 major economies in Italy and a bigger U.N. climate summit in Britain, Moon held a meeting with Pope Francis at the Vatican and asked the pope to visit North Korea to bring peace on the Korean Peninsula.

Francis reaffirmed his willingness to join the path to peace on the Korean Peninsula, saying he would gladly visit North Korea if he received an invitation from the North, according to presidential spokesperson Park Kyung-mee.

It was the second time that Moon held a meeting with the pope. In 2018, Moon delivered a verbal invitation from North Korean leader Kim Jong-un to Francis, and the pope said at the time he was willing to visit the North if Pyongyang sends him an official invitation. 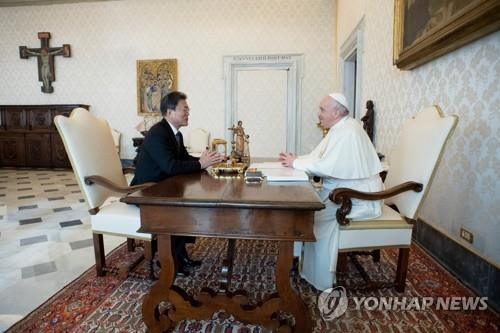 No further progress has since been made amid a deadlock in talks between the North and the United States.

Although it is uncertain whether North Korea will formally invite Francis to visit Pyongyang, Moon made the request to the pope at a time when he is also seeking international support for a declaration that will formally end the 1950-53 Korean War, which ended in an armistice, not a peace treaty. The Moon administration hopes to use such a declaration to revive stalled peace talks with the North.

On the sidelines of the G-20 summit in Rome, Moon held a brief meeting with U.S. President Joe Biden.

Moon told Biden he asked the pope to visit North Korea and the pope responded positively. Biden welcomed the exchange between Moon and the pope as good news and praised Moon for making progress in bringing peace on the Korean Peninsula. 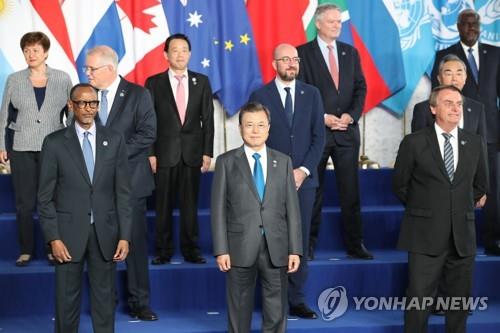 At the G-20 summit, Moon pledged that South Korea will complete the phaseout of coal-fired power generation by 2050 and aims to become a global hub of vaccine manufacturing for a fairer distribution of COVID-19 shots.

"We will increase the green-related portion of our official development assistance and continue financial backing for climate change response through the Green Climate Fund and Global Green Growth Institute," He said. "While doing so, we will strengthen cooperation with developing countries in green technology through the Climate Technology Centre and Network."

At the U.S. climate summit, known as COP26, in Glasgow, Scotland, Moon officially declared South Korea's commitment to cut greenhouse gas emissions by 40 percent from the 2018 levels by 2030. 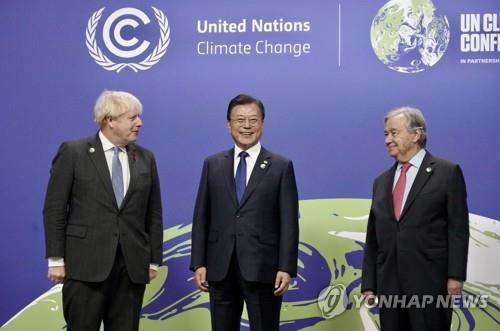 Moon also said South Korea will try to bring carbon emissions down on the entire Korean Peninsula by pushing for tree planting campaigns in North Korea.

As one of the key accomplishments at the U.N. climate summit, more than 90 nations, including South Korea, signed a global pact to cut releases of methane 30 percent by 2030.

"In addition to our domestic efforts, Korea will assist neighboring countries working to reduce their methane emissions," Moon said. "To help developing countries participate in methane reduction, we will share policies, experiences and technologies."

After wrapping up the two global summits, Moon made a state visit to Hungary and held a summit with Hungarian President Janos Ader.

They agreed to upgrade relations between the two countries to a strategic partnership as two-way trade grew at a solid pace despite the COVID-19 pandemic.

In Budapest on Thursday, Moon also held a summit with the prime ministers of Hungary, the Czech Republic, Poland and Slovakia in the second summit between South Korea and the Visegrad group. 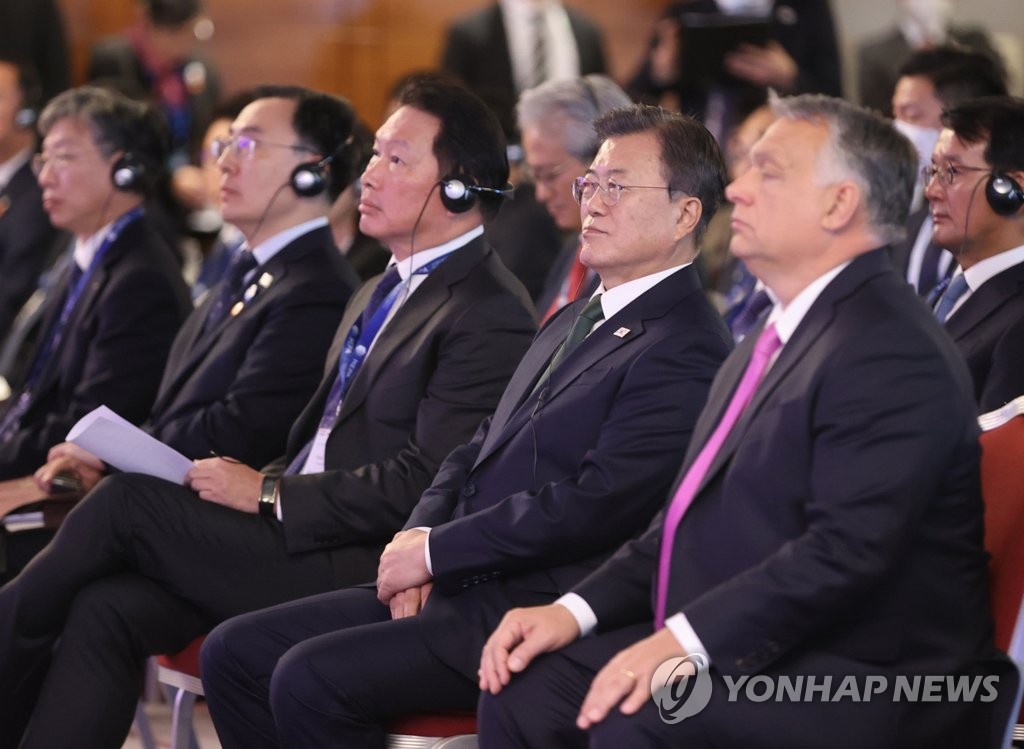 During the summit, the leaders gave high marks to the fact that bilateral trade between South Korea and the Visegrad nations reached an all-time high last year despite the pandemic.

Moon and the Visegrad leaders agreed to bolster their cooperation in the fields of economy, science, technology and climate change.

The Visegrad group is the second-largest market in Europe, and the summit is expected to help South Korean firms make inroads into the European market in the fields of electric cars and batteries.