During a regular meeting of the presidential National Security Council (NSC)'s standing committee, the officials checked the supply situation of urea water solution, a key material used in diesel vehicles to reduce emissions, and pledged to seek active consultations with countries concerned to ensure its stable domestic supply.

South Korea has been grappling with lack of the material and its soaring prices in recent weeks, as China has restricted its shipments amid a power crisis and a trade conflict with Australia. 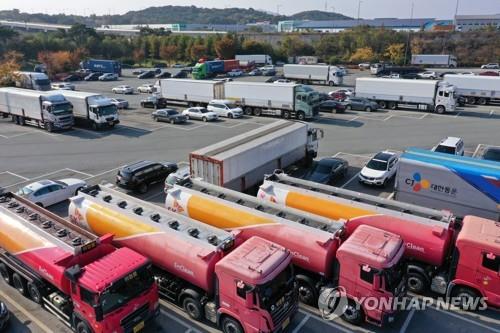 South Korea has relied heavily on China for supply of the agent, after most local manufacturers shut down around 2013 after losing their competitive edge over China, Russia and several other nations.

According to government data, a whopping 97.6 percent of the country's imports of the material came from China during the first nine months of this year.

The import unit price of industrial-use urea spiked to US$483 per ton in September from around $267 in October last year, the Korea International Trade Association said.

Around 2 million vehicles, including more than 550,000 freight trucks, need the diesel exhaust fluid solution to operate.

Earlier in the day, the foreign ministry said that it has asked China to simplify due inspection procedures for the early delivery of the material to South Korea, and has sought various diplomatic measures to resolve the shortage problem.

The industry ministry held an emergency meeting with importers of the agent, and vowed efforts to help swiftly find various supply channels other than China.

The government also decided to hold a weekly meeting to monitor the supply situation of the solution and other key industrial items, and to implement "all possible measures" to stave off any serious disruptions, including stern responses to any market manipulation attempts.

Meanwhile, the NSC members checked the security situation of North Korea and the region during the meeting, and vowed to expand international consultations to make progress in its drive for an end-of-war declaration and other efforts for peace on the Korean Peninsula.

In September, President Moon Jae-in renewed his proposal for a formal end to the 1950-53 Korean War, which officials here hope can contribute to confidence-building with Pyongyang. The war ended in a cease-fire, not a peace treaty, leaving the two Koreas technically at war.